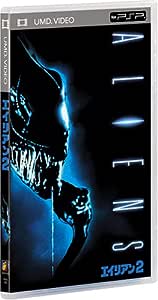 Willow
5つ星のうち5.0 Dare I say, better than the original...
2015年5月2日に英国でレビュー済み
Amazonで購入
It is rare for an sequel to be better than the original, that’s not to say the original was lacking in any way - most definitely not. But this sequel is an absolute corker; typically James Cameron. The action is non-stop and the scary bits (there’s a lot of ’em) are gripping. Brilliant brilliant brilliant! Need I say more… Well yes I do. This should have been the last Alien movie in my opinion as the others just didn't do it for me. Neill Blomkamp, rumoured to be working on a script for a new film in the Alien franchise, said that his sequel will disregard the events of 1992's Alien 3 and 1997's Alien: Resurrection. I'll drink to that.
続きを読む
5人のお客様がこれが役に立ったと考えています
役に立った
フィードバックを送信中...
フィードバックをお寄せいただきありがとうございます。
申し訳ありませんが、お客様の投票の記録に失敗しました。もう一度試してください。
違反を報告
レビュー を日本語に翻訳する

Amazon Customer
5つ星のうち5.0 The Talented Ellen Ripley
2012年10月8日に英国でレビュー済み
Amazonで購入
Aliens is a perfect film. After it was over I felt exhausted, as though I'd been running alongside Ellen Ripley. This is, in my opinion, James Cameron's best movie, closely followed by Terminator 2. The special effects and look of the film are awesome - every shot is absurdly rich - but they're backed up by magnificent storytelling which equals Alien's. Some of the same twists from Ridley Scott's movie are used, though Cameron tweaks them just enough so that we don't see them coming.
Sigourney Weaver is back, and this time around she's less naive, becoming an action hero who's not concerned about protocol. She's spent 57 years cryogenically frozen, drifting through space, and is distraught to learn that her daughter has since grown up, lived and died during her absence. She's picked up and woken by a salvage crew, then told about a colony which has been established on the planet where the aliens were found. They've since lost contact with the colony, and Ripley is sent as an adviser to join a bunch of marines in investigating what's happened.
In hindsight the marines could be seen as less malign precursors to Avatar's soldiers. Of those that are developed Bill Paxton plays Hudson, a petulant private, Jenette Goldstein is Vasquez, a butch shooter, and Michael Biehn is Hicks, a squad leader who grows close to Ripley (first Sarah Connor, then Ellen Ripley; Biehn got through the 80s sci-fi heroines). There's also an android (Lance Henriksen) who Ripley naturally distrusts, and Burke (Paul Reiser) a representative of the corporation that invested in the colony.
When they arrive on the planet they discover Newt (Carrie Henn), a young girl who escaped the aliens by hiding in the air ducts. She's of course traumatised, but is brought out of herself and comforted by Ripley. Their bonding is the film's emotional core, and in a way Newt serves the same purpose as Ripley's cat in Alien: she softens her, giving her something to risk herself for. Given that Newt is a child, not an animal, and Ripley's own daughter is dead, that raises the stakes. Henn gives a strong, realistic performance and her character's development was compelling. Weaver as Ripley is more confident and world-weary here. In Alien she felt slightly naive, uncertain, and at one point tried denying crewmates access to the ship in case they introduced a threat. Aliens' Ripley is more of a humanitarian, and disobeys orders so she can save her colleagues.
Though it does have similarities, Aliens is very different to Alien, which Ridley Scott compared to Ten Little Indians. Alien was a slower paced psychological horror story, while Aliens is pure pulp sci-fi. It tells an action packed tale filled with much larger aliens who do unspeakable things to the colonists and crawl about looking for fresh meat, their acid blood oozing from their horrible mouths. Aliens is, quite simply, a masterpiece, and one of the best films ever made.
続きを読む
10人のお客様がこれが役に立ったと考えています
役に立った
フィードバックを送信中...
フィードバックをお寄せいただきありがとうございます。
申し訳ありませんが、お客様の投票の記録に失敗しました。もう一度試してください。
違反を報告
レビュー を日本語に翻訳する

number 1 is the beginning and only one Alien, a new thing to everybody. Number 2 is a war between humans and aliens.

2 and half hours of brilliant film also if you check out picture gallery in Special features - you will think how talent James Cameron is. How good he made it into the film cos when you watch the film, it looks like they made it out of in the space and on other planet. Its made in 1986, not 2015.

Mr McComber
5つ星のうち5.0 Fantastic Movie
2011年4月29日に英国でレビュー済み
Amazonで購入
I'm only writing this because I've just watched this film for maybe the twentieth time and it's just a classic. What you don't often hear about is the humour, like when Bill Paxton says "Hey Vasquez, have you ever been mistaken for a man?" which is funny, and Vasquez, totally deadpan says "No,have you??" or when they first wake up from suspended animation and Paxton says "Damn, this floor's cold" and the sergeant says "What do you want me to do, fetch your slippers?" - "Gee sarge, would you, I'd like that?" - anyway who doesn't know the story, nightmarish armour plated serpents with acid for blood and jaws that shoot out and take your head off or lay eggs that turn into another alien that bursts out of your rib cage. Marines accompany Ripley to find out why Earth have lost contact with their colony, but of course, the company sets them up. Details of the earlier mission 57 years before were lost, but as soon as the suits hear Ripley's report, they tell the colonists to check out the eggs and the marines to bring them back to Earth under the pretence of a rescue mission. This really is a terrific movie, with great special effects, and although the films that follow are not on this level, they're all pretty good. The final battle with the aliens is intense and Sigourney Weaver gives a remarkable performance as Ripley, who has another go at wiping the aliens out, nearly succeeds too, just missed the one unfortunately, but this is straying into alien 3.
続きを読む
5人のお客様がこれが役に立ったと考えています
役に立った
フィードバックを送信中...
フィードバックをお寄せいただきありがとうございます。
申し訳ありませんが、お客様の投票の記録に失敗しました。もう一度試してください。
違反を報告
レビュー を日本語に翻訳する

Su
5つ星のうち5.0 one of my favourite films
2008年11月27日に英国でレビュー済み
Amazonで購入
I saw this at the cinema when it first came out.

I wasn't sure if I should because I really wasn't over fussed on the first, and to top it all off sequels are notorious for being bad, but this was and still is a great film. I admit the overriding reason I saw it was that I am a Michael Biehn and Bill Paxton fan.

I admit that I hadn't watched it for a couple of years, but decided to lift it out a couple of days ago and watch it. I wasn't sorry. Even after more than 20 years this is a great film, and in my opinion the best of the alien series.

The special edition version was one of the first of the 'directors cut' film releases. It sold so well that other films were produced with a 'directors cut' extended version too. The speical edition has an extra 17 minutes which doesn't sound much but is, in fact, a great deal. The missing scenes add to the story, and are included situ within the film rather than in an extras section of their own.

There are a number of extras including an interview with James Cameron, behind the scenes footage, etc.

The story is that Ripley (Sigourney Weaver) and the cat are rescued from the emergency pod that was left at the end of the first film. She has to face an enquiry over what happened to her crew and the vessel that they were in (it is the latter that appears to be the most important to the company).

Ripley is then approached by Carter Burke (Paul Reiser) and Lt Gorman (William Hope) to join them on a mission to the planet known as LV-426. She initially refuses but then agrees, and this is were we met the rest of the cast - the marines. The main marines for the film are Cpl Dwayne Hicks (Michael Biehn), Pvt Hudson (Bill Paxton), Pvt Vasquez (Jenette Goldstein), Pvt Drake (Mark Rolston), Sgt Apone (Al Matthews) and the "artifical person" Bishop (Lance Henriksen) - the entire group of actors who play the marines manage to pull off the feeling of a group that has been together for a while. Even the troops that we had only seen in passing are known to us because of the banter between the characters.

The film moves at a good pace after the initial and rapid story setting sequences. It's 148 minutes of outstanding film making. A true standard setting film.

t burt
5つ星のうち5.0 Total alien fest
2013年2月17日に英国でレビュー済み
Amazonで購入
I had this film in a dvd box set already but couldn't get it to play properly, this was the only disc I had a problem with, which was one of the best in the bunch.
Replacing aliens dvd with blu-ray was a good call because this film realy deserved to be in this format.
I love this film..
続きを読む
2人のお客様がこれが役に立ったと考えています
役に立った
フィードバックを送信中...
フィードバックをお寄せいただきありがとうございます。
申し訳ありませんが、お客様の投票の記録に失敗しました。もう一度試してください。
違反を報告
レビュー を日本語に翻訳する

Amazon Customer
5つ星のうち5.0 film size great
2017年9月30日に英国でレビュー済み
Amazonで購入
this is my 2nd favourite film and like I said about the ALIEN we have checked the size of the screen
and it was very good but haven't watched it yet but hope fully it will be ok
続きを読む
役に立った
フィードバックを送信中...
フィードバックをお寄せいただきありがとうございます。
申し訳ありませんが、お客様の投票の記録に失敗しました。もう一度試してください。
違反を報告
レビュー を日本語に翻訳する