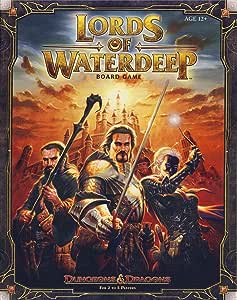 Flyingwizard
5つ星のうち4.0 Pretty good, enjoyable game.
2017年5月15日に英国でレビュー済み
Amazonで購入
I bough the this game specifically to be able to play 2 player with my partner (who likes board games like Talisman) - and as a game which could be scaled up to more than 2 players at other times. I had played twice before round a friends, so I did know what I was getting into before purchasing. This game works on both levels very well. This is essentially an 'euro style' 'worker placement' game (think Settlers of Catalan, or maybe Carcassone) with no dice; with wooden pieces or meeples, with a fantasy theme, namely a D&D concept, from one of the d&d backgrounds. I should point out that it uses none of the mechanics or rules from D&D and no knowledge of that game, or the background is required. The box is nice, having an unusual 'book' effect, making the lid shallow. The board is big and nicely designed, with space for discarded cards and the like and the pieces good quality, with a mix of wooden pieces and card. The money coins are particularly nice: square with holes in them. The box has a storage tray system in it, making the pieces fit nicely which is a nice touch, so you will not need zip lock bags or the like. It even tells you how to put the pieces away. The rule book is clear and quick to read and does a good job in telling you what to do. Have no fear, no 50 page rule book with people getting bored on the first play, well you struggle to get started. We were playing within 10 mins. The game is time limited to a certain extent, with a fixed number of 'rounds' - in the two player mode, you have more 'agents' and so it takes a little longer each time to place all you men and make decisions. We took about an hour to play each time; slightly longer the first time. In case you don't know these sorts of games having a scoring system and therefore you think you know who is in the lead, but due to end of game scoring based on the secret of who the 'lord' you are actually playing, this can be reversed quickly. In the first game, my partner won fairly clearly, but in the second we drew, which was actually nail biting, as each of us pulled out last minute scores. The main mechanic of the game is to build power by completing quests, which requires resources. These resources are earned by certain actions on the board. A warfare mission, might need 5 fighters and a wizard and the reward, some money and victory points, I.e. Power. This can be as emersive or abstract as you like. For example, you can say 'I need, 4 whites and a purple which I can get from those two squares' which is exactly what you need: coloured cubes from board positions, or you can say 'I need 4 clerics and a wizard, which I can get from the temple, or wizards tower', or whatever. You can also read the cards and look at the art, or read them out and enjoy the fantasy feel. Essentially the game mechanic COULD be transferred to any time, or setting and so the white cubes could be ships, or churches, or spaceships, but it's Waterdeep, so go with it. We didn't use the intrigue cards much, these are like 'effect' cards, played on other players, to slow them down or cause them grief, though many can benefit the person playing it, they seemed a little awkward in a 2 player game and we didn't use them much. The mandatory quests cards unlike other reviewers didn't bother us, and in my opinion didn't 'break' the game in any way. Don't use them if it bothers you. I have been playing board games and role playing games since the 1980s, but haven't played many of the modern Euro style ones. I recommend this game as a bridge between that style of game and a more traditional game. Some people not used to euro style games may be worried about lack of randomness but plenty of that is generated by the 'lord' you secretly play, the way quests come up and the building choices, so the game is different each time.
続きを読む
15人のお客様がこれが役に立ったと考えています
違反を報告
レビュー を日本語に翻訳する

Charley Greywolf
5つ星のうち5.0 Loved this game so much I went out and bought the expansion
2017年3月22日に英国でレビュー済み
Amazonで購入
Love this game and find it is always popular when I play it with friends.

A typical worker placement game, "insert frustration here when some one takes the spot you wanted".
You are given a lord card which is secret from everyone else which gives you bonus points for certain actions such as building or completing certain adventure cards. On your turn you place a meeple on an open space in order to collect little cubes (these are suppose to be different types of people but we mostly call them resources) to complete quests for points and sometimes treasure or more cubes, to get more quest cards, to play intrigue in the harbor etc the goal of the game is to have the most victory points at the end.

This game is simple to pick up, you do not need to know anything about Dungeons and Dragons to play. I have played games with children from 6 years up to just a table of adults and always had a good response. Also find its a great gateway game to get people in to this type of game as it is not to complicated to learn.

Whilst the theme is D&D, you don't need to have a knowledge of RPGs or the setting as the game flows nice and easily regardless. It's a game with relatively easy to understand mechanics but plenty of ways to win along with hidden objectives. This leads to high replay-ability, and its a useful game to get people coming from some more basic games into a more complex game whilst also keeping the more hard core gamer entertained.

Games are generally in the 45-90mins range depending on number of players and their understanding of the rules.

The game is well made, with good artwork and a box that is moulded to take all the pieces in a specific area. The later is very helpful for keeping the game in order, and for setting up/packing away.

Kevin Evans
5つ星のうち5.0 Newcomer to tabletop games
2017年11月11日に英国でレビュー済み
Amazonで購入
i’m a recent convert to ‘adult’ board games, and enjoy games with strong elements of replayability.
Had seen good reviews of this and took the plunge, and haven’t regretted it one bit.
Essentially each player is a Lord of Waterdeep with a secret agenda, which generally mean bonus points for completing specific types of quests over others.
The game itself plays out in 8 rounds, and sees you deploying your agents to gather resources, earn money, construct buildings, and use your resources to complete quests. Intrigue cards, and a limited number of resources available at any one time lead to conflict and competitiveness amongst the players.
After the eight rounds are complete, points are scored, including your secret bonuses, and the winner is declared.
We have played it probably 6 times so far as a family, and the mix of quests, building types, and intrigue cards have made each game as unpredictable as the last.
Lastl§y, I love the design of the game materials themselves - everything fits together perfectly, and the board and cards are extremely clear and easy to follow, meaning all the information you need is in front of you without having to keep referring back to the rules.
Already planning to pick up the expansion soon...

XJS Jag Girl
5つ星のうち5.0 A great modern board game
2018年3月25日に英国でレビュー済み
Amazonで購入
Bought as a gift for a fellow board gamer who had been eyeing this one for ages.
Don't worry if like me you're not in to the whole dungeons and dragons thing, the game could actually have anything on the box cover.
It's a good introduction to modern board games for anyone wishing to try something other than the old classics you remember from the 70s. Those where you shook a dice and moved around the board, did what it said, then waited whilst everyone else did the same, oh and at some point you'd probably loose all your money and be 'out of the game' then sit around waiting for someone to win.
Board games have evolved tremendously over the past 10-20 years and now there are so many it's hard to know which to buy and will you understand the rules?
Well the good news is there are lots of board game reviews on YouTube and instructional videos there too. Just type the name in of the game and see what appears. The other amazing source for anything board game related is boardgamegeek.com (BGG)
Anyway back to this game. It's very good. In fact it's still in the top 50 games rated by BGG out of nearly 10,000 - that's an indication of a great game.
So go watch a review or two of the game then buy it. You won't want to play monopoly ever again.