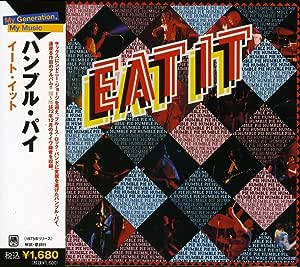 SkyChurch
5つ星のうち2.0 Souled-Out
2005年10月30日にカナダでレビュー済み
Amazonで購入
This is definitely not your typical Humble Pie record, as the music here is a much more; Soul and R&B based sound, as opposed to their typical, renowned, Hard Core Boogie Rock. The BlackBerries offer the backing vocals here, and their resulting subtle influence throughgout this disc. There are also plenty of horns (high in the mix), as well as even a pedal steel on a couple of C&W type numbers (yes). Apparently, Clem Clempson has previously stated; Steve Marriott mixed this album himself at his English Cottage - without full-band input. Hence, the consistent Soul, and R&B sound. As Steve was obviously overtly influenced by The Blackberries presence during this period - more so than the rest of the band. The entire disc is comprised of 15 tracks - equaling 65 minutes total. The final three tracks are live, recorded from Glasgow (72/73), and comprise 22 minutes of playing time - arguably the best 22 minutes on the disc. "Eat It" is probably the weakest effort out of the entire (Frampton/Clemson/Tench) Humble Pie Canon. But the 3 live tracks - show the band was still "as happening as ever". It would be nice to see this record reissued and remixed, with a second cd offering the complete Glasgow gig. Without the current 3 live tracks offered, I would only rate this a single star.
続きを読む
13人のお客様がこれが役に立ったと考えています
違反を報告
レビュー を日本語に翻訳する

Wharf Rat
5つ星のうち5.0 The Seventh Slice of Humble Pie [2009 SHM-CD Import]
2010年5月23日にアメリカ合衆国でレビュー済み
Amazonで購入
After the chart-topping success of "Smokin'", Humble Pie released what was then a double-album entitled "Eat It". Being a double-LP, Eat It offers any Humble Pie fan a great many sonic delights to aurally digest and enjoy (15 songs total).

As has been pointed out, Eat It was basically split into four parts: Side One being the 'Rock/Hard' side, Side Two being the 'Soul/R&B' side, Side Three being the "Acoustic/Stripped Down" side, and Side Four being the "Live Set" to round out the album. All four sides fit nicely on one CD.

There have been some who have complained of too much involvement by the "Blackberries", Humble Pie's background singers. I couldn't disagree more. The Blackberries were a great addition to the Pie's vocal harmonies and background singing. In addition, Steve Marriot wanted the Blackberries to lay down their tracks on this album, so I'm not going to question him on this point.

The first 12 cuts on this album (the studio cuts) are simply fantastic. They all blend together to form a great set of music; regardless of the rock, soul and acoustic distinctions. This is what Humble Pie has been doing from the beginning: pouring their hearts into great music regardless of style and creating their own distinctive sound. Marriot & Company are STILL on top of their game with this fine recording!! This album fits in nicely with their previous efforts. It will not disappoint a real fan of the Pie!

The final three cuts (the live set) reveals Humble Pie blasting out three great songs on-stage. The sound quality of these three songs is not as fantastic as their highly-regarded "Performance-Rockin' The Fillmore" release, but its still a great chance to hear Humble Pie charging through some great live songs and wowing their audience with their great live performing ability.

This album is a MUST HAVE for your collection of Humble Pie's bad-ass recordings and is also recommended for those who have yet to 'taste' Humble Pie. Buy Eat It!!

This review is of the 2009 Universal/Japan SHM-CD 24-bit Remastered pressing. The sound is absolutely superb and is highly recommended as THE one to buy. The packaging is an exact replica of the original, double-album; which, comes with an "obi" [UICY-94070] as well as an English/Japanese lyric foldout. Also, there are two inserts replicating BOTH original LP labels, one of which has a production/copy number printed on one side. The CD is enclosed within a static-free sleeve for protection. The outer CD sleeve is enclosed within a clear plastic sleeve to protect the mini-sleeve. THE best sound and packaging of ANY pressing! Get It!!
続きを読む
4人のお客様がこれが役に立ったと考えています
違反を報告
レビュー を日本語に翻訳する
すべてのレビューを参照します
Amazonプライム会員ならお急ぎ便、日時指定便が使い放題
さらに、映画もTV番組も見放題。200万曲が聴き放題 。クラウドに好きなだけ写真も保存可能。
> プライムを無料で試す