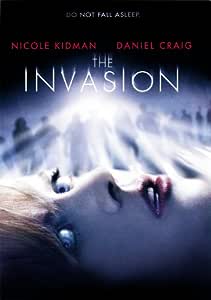 W. Lee
5つ星のうち5.0 Better than the reviews say
2009年4月7日に英国でレビュー済み
Amazonで購入
'The Invasion' is a much better take on the 'Invasion of the Body Snatchers' than it is given credit for. It was so maligned after its troubled production, that when I first saw this, I wasn't expecting much. Instead, I was treated to a very slick and well thought out science fiction thriller. The Body Snatcher movies have at their best, always made a comment about our society, and this does it rather nicely for our decade. Though the original 1956 version will always be my favourite, I actually think this is an improvement over the much touted 1978 version (Which does admittedly have some wonderful scenes, but overall I feel doesn't gel as well as the original or this updated version)

There are many who complain that it is a film of different styles, because of the switch in directors during production. Perhaps there is, but if you didn't know this specifically, you would simply think the director changed style with the story progression. I don't think it jars anywhere near as much as we're told it does.

It's not a perfect film, I would probably give it a 4 & 1/2, but since I can't, I've given it a 5. The HD version has an amazing picture, that really stands out. It's one of those films that if you're ever pondering the merits of HD over SD, pop this in, and you'll remember why you bothered with HD-DVD/Blu-Ray in the first place. The real shame is the lack of extras. There's a few that are better than nothing, but a substantially longer making-of and a decent commentary are sorely missing (And would have been very interesting, given the production problems).
続きを読む
4人のお客様がこれが役に立ったと考えています
役に立った
フィードバックを送信中...
フィードバックをお寄せいただきありがとうございます。
申し訳ありませんが、お客様の投票の記録に失敗しました。もう一度試してください。
違反を報告
レビュー を日本語に翻訳する