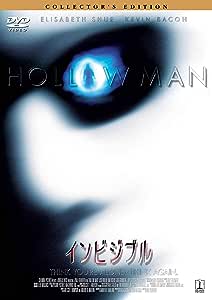 schumann_bg
5つ星のうち5.0 peek-a-boo revenge drama of ice sculpture maniac
2020年3月4日に英国でレビュー済み
Amazonで購入
Hollow Man wasn't particularly well received at the time of release, but it really is outstanding and completely amazes the viewer, as often with Paul Verhoeven's films. It is a modern version of The Invisible Man, bringing the full range of technical effects to bear, so that he becomes visible when under water, or splattered in blood, or walking through steam, and he has some gunk put on him that sets into a rubber second body, facially more or less recognisable, but with nothing there once the eyes and mouth are cut away. To make the most of all this the central character , who gets trapped in his invisible state in a high level experiment which then gets stuck - has to be particularly villainous, but Kevin Bacon brilliantly suggests a character who could go this way by his performance as a top-level, egotistical scientist in Washington who has no regard for his team. Their characters are also filled in, so that it turns into a thriller more than sci-fi really, but it is very well done and psychologically quite astute. Josh Brolin is excellent as the second male figure on the team who could easily be Rear of The Year, while Elizabeth Shue is brilliant, also having a lot of screen presence. It is their affair which pushes Bacon over the edge, as he had previously had an affair with Shue. The risque potential of the invisibility factor is well used to add a moral edge and unease that is well judged - it adds a further dimension to what is both quite subtle and in your face, elemental even in the way it uses water and fire, like a psycho-scientific myth.
続きを読む
4人のお客様がこれが役に立ったと考えています
違反を報告
レビュー を日本語に翻訳する

Kevin Bacon plays Sebastian, an ego-centric scientist leading a team working to find a way to make a human being invisible and then return them to visibility as part of a US military funded project. Having cracked the first part, it’s the second part he’s struggling to achieve. But when he does make what he thinks is a breakthrough and makes himself the test subject, he finds he cannot return to visibility. Eventually, his ethics, morals and sanity begin to buckle under the strain...........and all hell breaks loose!

A recognizeable cast including Josh Brolin, Elisabeth Shue and Kim Dickens get caught up in the carnage that follows and director Verhoeven (who admittedly I’m a huge fan of) never lets the pace slow. The visual effects which were cutting edge in 2000 have obviously aged a bit but actually it largely still looks quite good.

SDX
5つ星のうち5.0 "..VIOLENT SCI-FI THRILLER.."
2012年4月28日に英国でレビュー済み
Amazonで購入
This is a brilliant sci-fi movie very well made by Paul Verhoeven the awesome director of other cult classics like Robocop, Total recal and Basic instinct. Hollow man has a great story full of very cool visual effects, the film is very violent and gory, the directors cut version is now about 8mins longer than the DVD versions with all the previously unseen deleated scenes put back in like the rape scene (with Rhona Mitra) certainly worth the price as the Blu-ray version has an awesome picture quality. worthy of having in the collection.
続きを読む
2人のお客様がこれが役に立ったと考えています
違反を報告
レビュー を日本語に翻訳する