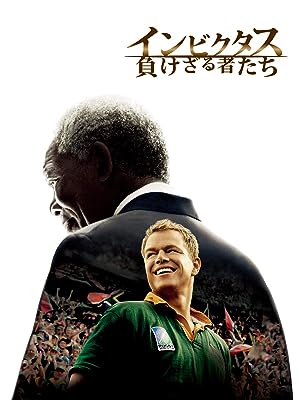 Brawny Withed
5つ星のうち5.0 A Great Film
2010年12月18日に英国でレビュー済み
Amazonで購入
I remember the first time I heard about this movie being made and being excited at the prospect of a film based on the events of the 1995 Rugby World Cup in South Africa and How Nelson Mandela used it to unify the country after decades of Apartheid oppression through Sport.

The Film itself uses archive footage as well as well paced action for the sports scenes and handles the drama and sensitive scenes very delicately. Clint Eastwood's director's touch is clearly visible on the screen and it is one of his finest films to date.

Morgan Freeman steals the film with his portrayal of Nelson Mandela and it never feels like Freeman over does the impression and makes the role his own.

Matt Damon is okay as François Pienaar, the captain of the South African Rugby Team but in my opinion most hollywood actors could have done the job just fine.

If you want to watch a well directed, touching and at times funny drama based on real life events watch this film.
続きを読む
違反を報告
レビュー を日本語に翻訳する

R. Chang
5つ星のうち5.0 Inspiring account of the power of motivation
2010年7月9日に英国でレビュー済み
Amazonで購入
I would first of all apologise readers of my reviews. I wrote a review for this DVD but posted it in error for the RFU 1995 acoount of the World Cup Competition in South Africa also available in DVD (2 discs set).

I watched the movie again this week with my elder son and it again brought tears to my eyes. It is very inspiring story about how to use motivation to inspire a team to achieve and to unite a nation.

I watched the RFU's Final match between South Africa and the All Blacks last night and even though I knew the ending I still found it gripping. I was at the edge of my sofa and could not switch the DVD player off even though it was passed mid-night until the final whistle.

Both DVDs are must owns if one has apsirations for South Africa and also a Rugby fan.
続きを読む
1人のお客様がこれが役に立ったと考えています
違反を報告
レビュー を日本語に翻訳する

Jvirmani
5つ星のうち5.0 Nostaligic and true
2019年4月3日に英国でレビュー済み
Amazonで購入
As a fellow South African who grew up and witnessed the change in the country when Nelson Mandela became president; this move encompasses everything that I felt and remember from the time. Beautiful watch. I've been a fan of rugby ever since I watched this Rugby World Cup live as a little girl. The portrayal of games unfolding in the movie is exactly how I remember it.
続きを読む
違反を報告
レビュー を日本語に翻訳する