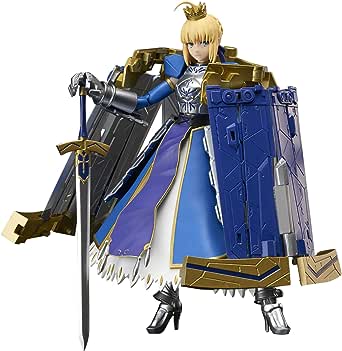 Chiang Wang
5つ星のうち5.0 Fantastic figure, articulation, and accessories!
2018年2月26日にアメリカ合衆国でレビュー済み
Amazonで購入
My gosh its one of the greatest figure I have ever owned. Colored instructions, stands for Saber and the sword, plenty of poses you can do! The only problem one might run into is if you have fat fingers, like myself, and you may have trouble putting some of the accessories together. Other than that, its great, plus it is cheaper on here than any other websites that I have browsed. this online vendor has earned my trust!
続きを読む
役に立った
フィードバックを送信中...
フィードバックをお寄せいただきありがとうございます。
申し訳ありませんが、お客様の投票の記録に失敗しました。もう一度試してください。
違反を報告
レビュー を日本語に翻訳する

Haken_Browning
5つ星のうち5.0 A weapon to surpass Metal Saber?
2017年7月24日にアメリカ合衆国でレビュー済み
Amazonで購入
So after going into the deep end with Fate/Grand Order but not having any short-term pull goals worth buying Quartz for, I decided I'd look into AGP Arturia Pendragon (name relocalized to avoid attracting the ire of The Cigarette Company Formerly Known As Phillip Morris), wondering if Bandai had learned any lessons from the shortcomings/short presses of Chogokin Saber. With my usual IRC contacts giving her an automatic negative for being an Armor Girls Project release (HINT: don't do this unless it predates the Infinite Stratos girls) and most review sites having nothing to offer except stock photos, I'd had to dip into the gacha budget to give her a proper evaluation. And you know what, she's worth a guaranteed pull for the price of four 10-pulls (6.5 if you're counting bonus free Quartz but let's not split hairs).

At her most basic, Arturia pulls off the "AGP girl Race Queen Bodysuit" look incredibly well - better even than a good few AGP releases outside of the "Tamashii Mix" subset of non-mecha properties, and possibly rivaled only by some hypothetical future AGP Mash Kyrielight (hint hint Delight Works). One pleasant thing I hadn't expected was for her thigh-high seams to double as swivel cuts - that's extra articulation AGPs typically don't have, and vital for posing since most of her legs will be covered by petticoats once she's dressed up. The usual variety of hands and faces are included, and the hand sockets/wrist pegs feel quite balanced on the Lightweight vs. Stable ratio relative to Chogokin Saber, despite being more or less the exact same setup. Maybe because you're not having to work around the Chogokin's molded-on greaves to do hand swaps? The one bit of core equipment AGP Arturia is missing relative to previous incarnations would be windswept hair fronts - we got spoiled for those in the days of Fate/Zero figure releases.

Getting Arturia fully equipped is a tricky process in places, meaning we'll need to consult the instructions...and what an instruction sheet it is! Full color photographs. Bilingual (Japanese/English) cautions. Easily the best instruction insert I've seen from a collector's action figure in decades, and centuries beyond anything you'd get from an American off-the-peg toy. Not even Nero would get any headaches following these.

So let's put on her dress and armor - in stages, to mimic Arturia's progression from freshly rolled to 2nd Ascension in F/GO. The main petticoat is irksome the first time, given it's two hard plastic side skirts that have to be clipped into peg sockets on the rear tabard, but will hold up well against all but the most barbaric of dis/assembly attempts. The shoulderpads are articulated and mounted on a backpack piece, with a blocky, Gundam-esque design that nearly lent itself to another title for this review. The cuirass slips over Artie's chest easily, but has a much harder time catching onto two pegs in the backpack - a case of "mis-machined by millimeters" that'll probably be papered over when displayed with gimmick(s) in full play. The quirkiest part, in a fun way, are Arturia's greaves - Bandai cheated their way out of having to make a second batch of mailed hand sets by having the whole greave assemblies peg onto the wrists and be large enough to feature a ball-jointed thumb and a mitten hinge each. Emotion Manipulators these ain't, but they're plenty bulky and stable for hefting either the two normal-sized Excaliburs (painted, and Invisible Air translucent) or the massive Variable Excalibur.

Variable Excalibur, per the stock photos, has two different assembly versions - a basic form with a total length of 9 inches, and an extended 11-inch version incorporating bits of Arturia's AS1 armor as additional spacers. (Has Bandai been taking lessons on Noble Phantasm enhancement from Riyo?) In either configuration, using the two included Tamashii Stage Act 4 bases and joint arms is paramount for posing. An additional clear support piece is included to peg right onto the blade's obvious 3mm sockets, allowing you to distribute its weight between a single stand and Arturia holding it (optimally herself supported by the other stand).

Additional ornamental/joint pieces are included to fold the Variable Excalibur back up into a facsimile of Arturia's 2nd Ascension cloak, and a hinged peg joint is incorporated into the sword handle for easy peg-on/peg-off action...which is great, since the "flat sheets of plastic trying to be fabric" motif doesn't lend itself to considerable sculpt accuracy or articulation clearance. It's not so obnoxious as to warrant knocking off the 5th star, but it's rather evident that Bandai wanted to make the giant Excalibur first, and worried about engineering it into a coat later. And if you eventually get fed up with it, you can even re-fold it into a Gundam-like backpack and give Arturia the best Strike Noir cosplay this side of a Tamashii Web re-release as AGP Saber Alter.

Finally, Sirs Not Appearing In This Review include Arturia's Burger King of Knights crown (a rather simple piece, basically held on her head by her ahoge unless you want to play with microscopic amounts of adhesive) and a toothed spacer for keeping the short-form Variable Excalibur pegged together.

TL;DR LET'S GO TO VERDICTS:
Does she beat Chogokin Saber? - It's a neck-and-neck race, as that particular Artie features the nice heft of metal parts, Avalons for her Excaliburs, the marble pedestal stand, and the lightning aura effect piece. If you got your hands on one before she crossed the $100 mark, though, I'd say it's worth having her accessories to complement AGP Arturia.
How does she fare against the UBW Anime Figmas (Saber 2.0 and Dress)? - A hard call since I don't actually own either, but Saber Dress, at least, is blown out of the water due to the foolish choice of making her dress a single molded petticoat, a la Nero. AGP Artie doesn't boast the same petticoat flexibility as Chogokin Artie, but has enough to keep pace with Figma Artie 2.0 and even looks great with it taken off.
When's Alter/Nero/Jeanne/Mash/etc.? - If not Never, Not Soon Enough. Bandai has a nasty habit of banging stellar side-releases out of the park once or twice and then letting the relevant IP lapse back into Max Factory's hands. I'm still waiting for a D-Arts Nemissa to go with Raidou and the Izanagis, for instance. Only time will tell if AGP Gore Magala Girl will be in the same boat.
続きを読む
2人のお客様がこれが役に立ったと考えています
役に立った
フィードバックを送信中...
フィードバックをお寄せいただきありがとうございます。
申し訳ありませんが、お客様の投票の記録に失敗しました。もう一度試してください。
違反を報告
レビュー を日本語に翻訳する