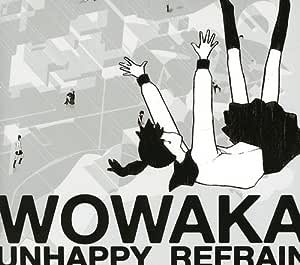 JeSSe CLaRk
5つ星のうち5.0 EASILY one of "her" best!
2017年1月16日にアメリカ合衆国でレビュー済み
Amazonで購入
EASILY one of the best all-around CDs to feature Hatsune Miku.
I was hesitant to buy this at first because it was billed as the "frantic!" side of vocaloid music, but WOW!
Frantic yes, but I'd say that musically *POWERFUL* (the key word being "musically") is a better way to describe this phenomenal CD that every Miku fan MUST own!

Robert Santiago
5つ星のうち5.0 LOVE WOWAKA!!!!
2015年3月12日にアメリカ合衆国でレビュー済み
Amazonで購入
Can never go wrong with Wowaka. Once I received the album i listened to the whole thing without skipping a track, and yes i Loved it! Rollin girl (both versions) have become one of my favorite songs the instant i heard it, I recommend this album to anyone who has never heard of wowaka. Prepare to be amazed.
続きを読む
1人のお客様がこれが役に立ったと考えています
役に立った
フィードバックを送信中...
フィードバックをお寄せいただきありがとうございます。
申し訳ありませんが、お客様の投票の記録に失敗しました。もう一度試してください。
違反を報告
レビュー を日本語に翻訳する

Billy C.G.
5つ星のうち5.0 Solid Album
2016年12月21日にアメリカ合衆国でレビュー済み
Amazonで購入
Even though I'm a long-time fan of Vocaloid, this is the first Vocaloid album I've bought, and it's really good! I've played this with friends and family who aren't familiar with Vocaloid, but enjoyed it regardless.

The album came with a nice, sleeve? around it of it. I'm not sure what it's called. But it makes the album look even nicer! Inside the case, the two CDs had lovely art on them and the lyrics booklet had more art similar to the cover. All of the visuals were just lovely! The album itself is pretty good. It has two CDs, first having fourteen of wowaka's originals and the second has seven remixes done by other artists. The artists in question are, acane_madder, Dixie Flatline, Captain Mirai, whoo, and TokuP. They all do a great job, in my opinion!

The tracks on the first CD are pretty solid. Starting off with the titular song, Unhappy Refrain, with other classics, like Rolling Girl and World's End・Dancehall. One song I had not heard of before buying the album, I Won't Let You Through, is one of my favorites. All of the songs on the first disc feature Hatsune Miku, with only World's End・Dancehall having Megurine Luka as well. On the second disc, three of the remixes keep the same vocals as the originals. acane_madder sings in her own remixes, while TokuP has pagodes sing in theirs.