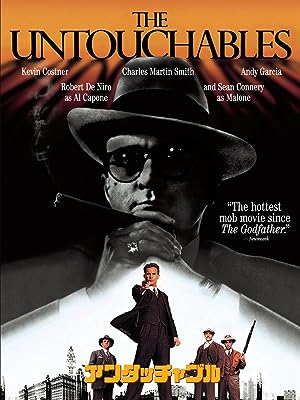 rob stirling
5つ星のうち5.0 Powerful action/drama brings the 1930's alive.
2018年12月19日に英国でレビュー済み
Amazonで購入
Sean Connery won the best supporting actor Oscar for his performance and he must have a chuckle every time he sees the trophy, reveling in the knowledge that he pulled one over the Oscar jury. He's a great Scot with a Scottish lilt to his voice that he couldn't hide even when playing an Irish cop, and that lilt often came over in his James Bond days too.
That criticism aside this is a beautifully crafted film in my opinion, with Brian De Palma setting out 30's Chicago and the period American settings wonderfully well giving us the feel of the times.
Loved the set-up of the major events in the film and even the minor skirmishes between the protagonists such as a shooting in a lift and Capone's dinner table meeting with his cohorts, all were skillfully directed, and chilling too.

Kevin Costner, at times stoic or passionate, Connery's wise, rough and weary vet, and Robert De Nero as Capone, brilliant but underused, were stand out performances which complimented the dramatic action sequences that made this unforgettable in the gangster genre.
Music by the master Ennio Morricone, different but fitted the film's mood like a silk glove.
English subtitles, needed specially for Sean's Oirish accent!
続きを読む
4人のお客様がこれが役に立ったと考えています
違反を報告
レビュー を日本語に翻訳する

TeeBee
5つ星のうち5.0 Some good performances.
2019年8月10日に英国でレビュー済み
Amazonで購入
There are some very worthy actors in this film, Sean Connery for instance delivers a fortifying experience which adds to the skills of the others. I am not a fan of Kevin Costner, not because he is a bad actor but simply because I regard him as being rather dull. Nevertheless, this is an extremely well put together classic film and it still will be watched long after we have passed on.
続きを読む
3人のお客様がこれが役に立ったと考えています
違反を報告
レビュー を日本語に翻訳する

Martinlawrencecocksedge
5つ星のうち5.0 top notch displaying film
2020年1月14日に英国でレビュー済み
Amazonで購入
Arrived in prompt tine. Formely seen this a stretch back on dvd,but bought for someone to watch. Formed upon the popular tv series of film. Eliot ness speaheads a campaigm with efforts to bring down al capones empire and the man himself backed up by famous team .good supporting actors such as sean connery.characters blend in superb are engaging. Powerful action. Exceptional classic livens up 1930s and the music is fitst rate to listen during movie. Well worth watching again.
続きを読む
1人のお客様がこれが役に立ったと考えています
違反を報告
レビュー を日本語に翻訳する

Martin Peter Collinson R.A.F
5つ星のうち5.0 Fantastic blu ray transfer!
2019年8月8日に英国でレビュー済み
Amazonで購入
A fantastic blu ray transfer especially when the untouchables work with the Canadians !
The colours are strong and they give depth to the picture , Kevin Costner at his best and Sean ( 007 ) is really good!
If you like gangster films you will love this film!
続きを読む
3人のお客様がこれが役に立ったと考えています
違反を報告
レビュー を日本語に翻訳する

Thespionic
5つ星のうち3.0 Average Fare
2014年4月12日に英国でレビュー済み
Amazonで購入
I was a little under whelmed to be honest! Not a bad watch but as good as the Godfather? Come on! Yes, it's worth an evening of anyone's time but I would suggest this won't linger too long in the memory.
Costner's role as Eliot Ness is far too tame - he could have been on Jackanory and wouldn't have frightened the kids! Connery won an AA for this but it's beyond me as to why, he was good but the role did not allow a great performance. In places this film was downright corny. I even found De Nero's role as Capone slightly laughable in places.
Gangsters are meant to be ruthless and menacing, the top cops equally so, neither came close to that here. The story line was far from gripping and overall for a mobster tale it was very bland - I never hid behind the sofa once!
Very average fare.
続きを読む
3人のお客様がこれが役に立ったと考えています
違反を報告
レビュー を日本語に翻訳する
すべてのレビューを参照します
トップへ戻る
Amazonについて
Amazonでビジネス
Amazonでのお支払い
ヘルプ＆ガイド
日本語ショッピングのための言語を選択します。 日本ショッピングのための国/地域を選択します。
© 1996-2020, Amazon.com, Inc. or its affiliates