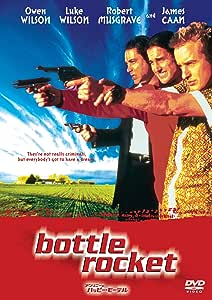 Treefingers
5つ星のうち5.0 a must see!
2009年7月29日に英国でレビュー済み
Amazonで購入
Bottle Rocket is the breakout film for writer/ director Wes Anderson, Owen Wilson, (who also co-wrote it) and his brother Luke.

Anderson and Wilson's script is absolutely fantastic. It was fleshed out from a short sketch in black and white years earlier, and the amount of love and care that has gone into it over the years is plain to see.

Anderson's direction shows the promise he would later fulfill, despite this film lacking the sort of budget which he would use to such great effect later, particularly in the Life Aquatic. Anderson still manages to pack this film with loads of subtle details, however, for example Wilson's notebook with his 75 year plan for their life of crime. He flicks through it so fast that its impossible to read in real time, but i would actually recommend pausing it on each page as it is absolutely hilarious!

And the acting, mainly by the Wilson brothers, is very warm and affecting. You can't help but be taken by them and their next crazy scheme. James Caan is also enjoyable in his extended cameo towards the end.

This is a side-splittingly funny film, with some of my favourite quotes in any film ever (Owen Wilson describing his latest scheme - "Here are just a few of the key ingredients - dynamite, pole vaulting, laughing gas, choppers, can you see how incredible this is gonna be...hang gliding... Come on!")

happysouls
5つ星のうち4.0 An enjoyable evening well spent!
2016年4月12日に英国でレビュー済み
Amazonで購入
I bought this because we have absolutely loved all of Wes Anderson's films and so I'd been looking to see what else he'd done. It's not quite the masterpiece of some of the later films, but still really enjoyable to watch. You can see the contributors are just starting out and some of the ideas they're playing around with in this film turn up in other ones later. Some very funny moments, a mad script and an enjoyable evening well spent!
続きを読む
2人のお客様がこれが役に立ったと考えています
違反を報告
レビュー を日本語に翻訳する

RD Macken
5つ星のうち4.0 Classic caper movie, with a typical Wes Anderson script.
2015年3月27日に英国でレビュー済み
Amazonで購入
Very funny caper movie. Script is classic Wes Anderson, just not quite the scale we're used to, as you would expect with this being his 1st film.
Fans of his other works will find plenty to enjoy in this film. Owen Wilson dominates the show, but the random ensemble for his robbery crew are fantastic. Also nice to see Jimmy Caan cameo in this type of film.
Well worth a fiver.
続きを読む
違反を報告
レビュー を日本語に翻訳する

GORDON
5つ星のうち3.0 Hit and miss
2018年7月2日に英国でレビュー済み
Amazonで購入
This movie had its moments, but generally became quite tiresome. Maybe i overthink things, but some of the actions of the relevant players are just plain ridiculous and i struggle to see past such nonsense.
続きを読む
1人のお客様がこれが役に立ったと考えています
違反を報告
レビュー を日本語に翻訳する