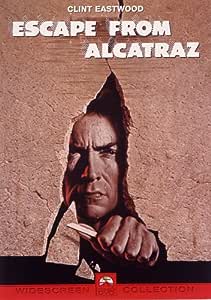 MAD DOG
5つ星のうち5.0 They made it, or did they.
2014年11月14日に英国でレビュー済み
Amazonで購入
Perhaps one of Clint Eastwoods lesser appreciated films. But this film is a cracker, and in my top 10 best films Eastwood has ever made. I am a massive fan of Eastwood and own every single one of his films and the Raw Hide collection. I have multiple copies of his films on DVD and Bluray, including limited editions, box sets etc. I even have many of the movie sound tracks and recently went to his ranch in Carmel By The Sea and had a wonderful meal. Anyway that's enough showing off, but I just wanted to clarify how much of a fan I am.

Escape From Alcatraz is true story about inmate Frank Morris, played brilliantly by Eastwood, who is mastermind escapest with a very high IQ. He is sent to The Rock, and immediately starts planning his escape. Also joining in the escape are brothers, John and Clarence Anglin. They devise a plan by slowly digging away at the vents at the back of their cells which are now damp and corroding with the salt air. The Rock had been a federal prison since 1934 and this film takes place from 1960 to 1962 when the escape takes place on June 11th. The building was completed in 1859 as used as a fort until turned into a military prison in 1907 before becoming a federal prison in 1934 but was closed in 1963 due to high maintenance costs. In 1972 the island was claimed by the National Parks and opened to the public. In 1996 Sean Connery and Nicolas Cage stormed the island to save the San Francisco bay area from being blown up by Ed Harris. OK the last part is fiction, but what a great film The Rock is.

Back to the review. But I hope you liked a bit of history of Alcatraz. Eastwood looks lean and menacing in the role of Morris but without being macho. The way the escape is slowly set up with gathering the required tools to bust out is realistic. The shower scene is good when Morris is approached by another inmate wanting to hang out the back of him. Come on man, you can't mess with Clint. Patrick McGoohan plays the warden with a slightly eccentric maner which really works.

The film was shot mostly on location at Alcatraz and you can't really tell what are sets and what is the real thing. It's that good, which contributes massively to the mood of the film. I have visited Alcatraz recently and can say 100% how authentic the film is and how the story is portrayed. There are no heroes in this film, just honest, real people who are pretty likeable despite being crims.

This film was the last time Eastwood and director Don Siegal worked together. The other films he directed with Eastwood were Coogans Bluff, Two Mules For Sister Sara, Dirty Harry and The Beguiled. Oh and Siegal is the barman in Clints directorial debut, Play Misty For Me. A great team together, who made brilliant films. Eastwoods own style also shows through in the films he has directed and has clearly been influanced by Siegals own style of film making.

Escape From Alcatraz is a film everyone should see. Spread the word and get the film more noticed. Just to finish, my top ten Clint Eastwood films, he has been in anyway are:

Quantum 4K
5つ星のうち5.0 Alcatraz! A brilliant classic
2015年3月15日に英国でレビュー済み
Amazonで購入
Clint Eastwood has the leading role on this fantastic movie. This movie challenges big movies like Shawshank of Redemption and The Green Mile. The story is thrilling and full of action. Its a very harsh and very hard life inside Alcatraz, the warden is a very vindictive person too. Frank( Eastwood) is having none of it. The escape plan takes shape bit by bit and the intensity of making it outside is portrayed in the movie really well. This amazing classic captures the prison life in Alcatraz extremely well. Other have tried years later but this still remains one of the most originally done prison movies. Now the blu ray looks good for its age. Don't expect 10/10 as this a 25+ year old movie but the upgrade is well worth it. The detail is all there. A good job indeed.If you yet are sceptical about the blu ray conversion you don't really need too as you will enjoy it even more on blu ray. Just get it as you won't be disappointed. I certainly I am not. I love the movie and my eyes agreeing with me.
続きを読む

alley kat
5つ星のうち5.0 A Clint Eastwood great,
2013年11月30日に英国でレビュー済み
Amazonで購入
Alactraz 1962, this film is based on a true story of the escape of 3 convicts, Frank Morris (Eastwood) & brothers
John & Clarence Anglin, from the island prison on the rock, with a series of ingenious manoeuvres that took a year to complete, & out foxing the cruel warden, played here by "Danger Man" himself Patrick Mcgoohan who suspects anybody & anything, the film covers everthing that the trio did, including paper mache' dummy heads with hair to fool the nightime patrols.
But the question is did they survive or drown ? they were officially never seen again,
I also got the documentary DVD "Breakout from Alcatraz" for the real "true story" with rumours of a waiting boat that picked them up & whisked them to foreign climes, with sightings reported, the story is compulsive viewing & you do wish there was a happy ending for them, but you will have to make your own choice.
続きを読む
3人のお客様がこれが役に立ったと考えています
役に立った
フィードバックを送信中...
フィードバックをお寄せいただきありがとうございます。
申し訳ありませんが、お客様の投票の記録に失敗しました。もう一度試してください。
違反を報告
レビュー を日本語に翻訳する

rbmusicman/and/movie-fan'
5つ星のうち5.0 'THERE IS NO ESCAPE FROM 'THE ROCK' ??
2013年6月17日に英国でレビュー済み
Amazonで購入
'Clint Eastwood' gives a gritty and convincing performance as bank
robber 'Frank Morris'
He's sent to serve out his remaining term of imprisonment at the
infamous 'Alcatraz' penitentiary.
'Frank' has a history of escaping prison, however 'Alcatraz' has a
reputation to uphold......nobody escapes.
compelling viewing.
the film is based on factual accounts leading up to the escape.
also filmed on location at 'San Francisco's' notorious prison.
unlike many of the Blu-ray transfers of 'Clint's' movies some effort
has been made in terms of picture quality, though still some ways short of
what I believe could be achieved when the film company's have the will to do so.
続きを読む
2人のお客様がこれが役に立ったと考えています
役に立った
フィードバックを送信中...
フィードバックをお寄せいただきありがとうございます。
申し訳ありませんが、お客様の投票の記録に失敗しました。もう一度試してください。
違反を報告
レビュー を日本語に翻訳する

Mr. A. J. Ireland
5つ星のうち5.0 One of Clint's best.
2015年5月5日に英国でレビュー済み
Amazonで購入
Clint Eastwood star's & direct's in this tense real life story ,about three prisoner's who break out of the world's strongest jail .
Great acting ,and a super supporting cast ,all add up to a fantastic movie.
Really like the prison warden ,played by the late great Patrick Macgoohan ,he of Danger Man fame.
His character is really intense .and does not trust anybody .
The interesting thing is that to this day nobody know's if they survived or died ,as they were never seen again ,both in the movie and real life.
続きを読む
役に立った
フィードバックを送信中...
フィードバックをお寄せいただきありがとうございます。
申し訳ありませんが、お客様の投票の記録に失敗しました。もう一度試してください。
違反を報告
レビュー を日本語に翻訳する
その他の国際レビューを読み込む

What you are buying is a vanilla Region 2 DVD - and there's absolutely nothing wrong with that. The print is clean, though heavy on grain which reflects the era in which it was made, but it's a lot better than you've probably seen on the late-night BBC television slot. Good, clear mono sound. I watched this on a 40" Sony Bravia upscaled via a Sony BD-550 player and it looked fantastic.

If you don't care about extra features and like your films to look the way they've always looked, this is a great disc. At the time of writing, it can be had for about three quid.
続きを読む
2人のお客様がこれが役に立ったと考えています
役に立った
フィードバックを送信中...
フィードバックをお寄せいただきありがとうございます。
申し訳ありませんが、お客様の投票の記録に失敗しました。もう一度試してください。
違反を報告
レビュー を日本語に翻訳する

Greg Chapman
5つ星のうち5.0 Very good film
2013年7月26日に英国でレビュー済み
Amazonで購入
Again, I got this with "The Eiger Sanction" and had to wait a week before I could go down to the Delivery Office, as I was out when the mail came, and the postman wouldn't leave it by my door! This is a very good film, and what makes it even better is Eastwood's acting, and the fact that it was filmed inside Alcatraz! This is one of Eastwood's best films. It also completes my Clint Eastwood Collection! I will watch this again and again!
続きを読む
役に立った
フィードバックを送信中...
フィードバックをお寄せいただきありがとうございます。
申し訳ありませんが、お客様の投票の記録に失敗しました。もう一度試してください。
違反を報告
レビュー を日本語に翻訳する

David
5つ星のうち5.0 Terrific movie, terrific storyline
2012年8月21日に英国でレビュー済み
Amazonで購入
Having visited Alcatraz Island off the coast of San Francisco several months ago I just had to buy all the Alcatraz movies currently available. This is the best of the ALCATRAZ movies in my opinion. Great acting from Clint Eastwood and the rest of the cast. Tension builds as the prisoners plan their escape and I was rooted to my chair. Worth every penny of the asking price. Absolutely no complaints. DVD arrived promptly, was well packed and in mint condition.
続きを読む
役に立った
フィードバックを送信中...
フィードバックをお寄せいただきありがとうございます。
申し訳ありませんが、お客様の投票の記録に失敗しました。もう一度試してください。
違反を報告
レビュー を日本語に翻訳する
その他の国際レビューを読み込む

LOTTO WIZARD
5つ星のうち5.0 Stunning stuff
2013年10月12日に英国でレビュー済み
Amazonで購入
Clint Eastwood suits this part very well, cool Clint throughout based on a true story, meticously thought out planned escape to the very end. The mind boggles at the sheer grit and determination of such people confined in such places, and how the planning was carried through undetected. Its a film you will watch over and over again, as much of Clint's stuff is anyway !!
続きを読む
役に立った
フィードバックを送信中...
フィードバックをお寄せいただきありがとうございます。
申し訳ありませんが、お客様の投票の記録に失敗しました。もう一度試してください。
違反を報告
レビュー を日本語に翻訳する