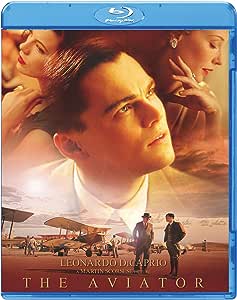 Samuel Barber
5つ星のうち4.0 Great performance by Cate Blanchett as Katherine Hepburn
2015年2月24日に英国でレビュー済み
Amazonで購入
Although it is over 2 hours and 40 minutes, it almost feels quite short because of what's not in the film. It doesn't explore Howard Hughes' relationship with Cary Grant, nor Jean Simmons' reaction to him making a pass at her. What it does do is explore his relationship with Katherine Hepburn and Ava Gardner. There is also a good scene where he crashes on the rooftop of suburban houses in LA. It takes you through the painful process of descending at speed, the impact of crashing, the panic of trying to escape, and the terror of facing a ball of fire coming towards you. It's quite a good film, but I feel that there needs to be a film on Cary Grant and perhaps Bernard Herrmann as parts of the music sounded Herrmann-esque.
続きを読む
2人のお客様がこれが役に立ったと考えています
違反を報告
レビュー を日本語に翻訳する

Sasha Bell
5つ星のうち5.0 Masterful performance by DiCaprio
2018年1月31日に英国でレビュー済み
Amazonで購入
Brilliant film charting the life of Howard Hughes. Brilliant acting from Leonardo DiCaprio. Although it is quite a long film, best part of 2 hrs, you get so engrossed in the storyline you don't notice the time. Leonardo has done his research when depicting Hughes' OCD, he portrays it well and helps us to see how this debilitating condition can take over a persons life. Well worth watching again and again.
続きを読む
3人のお客様がこれが役に立ったと考えています
違反を報告
レビュー を日本語に翻訳する

Seanus
5つ星のうち4.0 Almost an absolutely excellent film
2012年8月30日に英国でレビュー済み
Amazonで購入
First the negatives - Leonardo DiCaprio as Howard Hughes is a spectacular failure, not because he acts badly but because he just looks too damned young throughout the film to carry off the required gravitas needed for the role. No real history of Howard Hughes' technical genius is given. We get a small portion of where the OCD started but nothing about his fortune or his understanding of plane design. finally I don't think the film actually does justice to what he actually achieved. Other than that, the film is actually very good, they try to get the main facts of his life in the film (maybe a little disjointed but just read up about him and it all makes sense) and I actually think Leo does a good job of acting. Yes you do get a slight feeling of being cheated at the end because you just want so much more information and background but as with any film it needs to be edited to fit into a sensible timeframe. All in all maybe a little too much editing, maybe too little emphasis on the achievements of the man but a really good film
続きを読む
2人のお客様がこれが役に立ったと考えています
違反を報告
レビュー を日本語に翻訳する

RoughNorth
5つ星のうち3.0 50 minutes too long
2019年5月15日に英国でレビュー済み
Amazonで購入
No need for this to almost be touching two hours - just not enough to hold ones attention for that long in the instaera.

Howard Hughes made out to be a bit smarter than he actually was - in reality he was probably the worst businessman of the 20th C.

RR Waller
5つ星のうち4.0 The Flyer
2011年8月13日に英国でレビュー済み
Amazonで購入
This is a thoroughly enjoyable film which captures the eccentric, exciting but, ultimately sad character of Howard Hughes, a man who seemed to have everything. Although the special CGI effects occasionally leave a lot to be desired, it does encapsulate the excitement of flying, having lots of money and designing and running an airline.
Hughes, played well by Leonardo diCaprio, is shown to be a very talented aircraft designer, test pilot and film-maker, even if he did have some obsessions.
I particularly enjoyed Cate Blanchett's portrayal of Katharine Hepburn, one of his serious loves, and the accuracy with which she captured her voice. The scene defending "The Outlaw" is also highly amusing, both in its content and its portrayal.
Martin Scorsese's "The Aviator" is a very enjoyable film which deals sympathetically with one of the legendary characters of his own profession, the aircraft industry and the financial markets. The scenes dealing with Hughes's life-long obsession with cleanliness are very moving, particularly as it increases and the final scenes are deeply poignant.