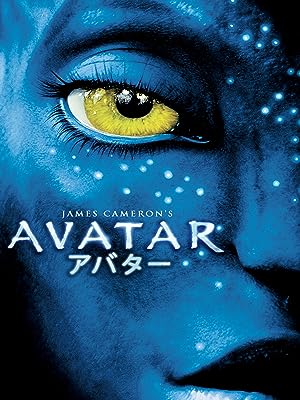 Miss C. Tofts
5つ星のうち5.0 Extended Blu-ray Collector's Edition
2018年10月4日に英国でレビュー済み
Amazonで購入
I have been upgrading some of my dvds since I bought a UHD blu-ray player. This is the best thing I have bought so far. It is truly amazing and worth every penny. If only all blu-rays were like this but sadly they are not. Have been ripped off many times buying stuff that looks no different from an ordinary dvd but you won't regret purchasing this believe me. Really excellent.
続きを読む
9人のお客様がこれが役に立ったと考えています
違反を報告
レビュー を日本語に翻訳する

C. R. Menhinick
5つ星のうち5.0 The most incredible film I have ever seen (in 3D)
2017年9月26日に英国でレビュー済み
Amazonで購入
I never saw this in 3D at the cinema but have seen it on 2D TV several times and love the film for its outstanding and imaginative rendering of an alien planet and its incredible wildlife and inhabitants. I recently purchased a Sony Blu-ray player and had the chance of seeing Avatar in 3D for the first time. Wow! I just sat and watched Avatar in 3D over and over, seeing different elements and details every time.
続きを読む
9人のお客様がこれが役に立ったと考えています
違反を報告
レビュー を日本語に翻訳する

jokerdriver13
5つ星のうち5.0 Purchased Out of Curiosity, Now a Treasured Film in My Collection.
2016年2月2日に英国でレビュー済み
Amazonで購入
I purchased this particular copy of Avatar over 3 years ago, because I had just bought a new 3D TV, and new sound system for my bedroom. I was also one of very few people in the world who had not seen Avatar in the cinema.

I said I purchased this set out of curiosity and I am so glad I did. When I watched the movie for the first time (in 3D), I was glued to the screen for the entire time. I was fascinated by the history of each character, and to this day, I still feel I want to visit Pandora, because it is such a magical and interesting place.

Overall, if you want to watch Avatar, and have the flexibility to watch it on any media device (games console, computer, DVD/Bu-ray player, etc.), then purchase this item. I do not regret buying it for a single second, and I don't think anyone else will either.
続きを読む
6人のお客様がこれが役に立ったと考えています
違反を報告
レビュー を日本語に翻訳する

tsd
5つ星のうち5.0 Extraordinary film and presentation
2021年1月13日に英国でレビュー済み
Amazonで購入
An outstanding film that I originally saw in 3D at the cinema, and remembered very little about.
Seriously long, but well worth the journey. James Cameron at his best.
The blue ray presentation is excellent and really adds to the experience, highlighting details that could be missed in a lesser format.
My only quibble is why they needed to include 3 versions of the film. My advice would be to watch the extended version and forget the others.
I haven't yet watched the bonus material, but it looks like there's an interesting and extensive selection of interviews and documentaries.
Well worth the money.
続きを読む
違反を報告
レビュー を日本語に翻訳する

DM
5つ星のうち4.0 4 stars for the 3D and visuals, 2.5 for the film, 1 for Sam Worthington's "acting"
2015年5月22日に英国でレビュー済み
Amazonで購入
I watched Avatar at the cinema in 2D on release, and there is definitely something special about the presentation of Pandora and it's native plant and animal species, especially at night - no other film I've seen is quite as striking.

Cinema purists complain about the 16:9 full frame "issue" saying its not cinematic enough and the additional screen space has been pretty much wasted, but with a film this good looking I'm sure James Cameron just didn't want anything to go to waste.

The story is literally Dances With Wolves set in space, and Sam Worthington's character Jake really isn't likeable, even if you sympathise with his physical disability. All the way through the film he acts like a real tool, and at the end of the film he is still just brave and stupid.

Maybe this was supposed to have an undercurrent of "love conquers all", or maybe even a redemption story; but there is no drama in the love story, Jake never gets truly punished for the things he does wrong, doesn't seem to learn from his mistakes, doesn't have to come to terms with his physical disability and doesn't seem like a better person at the end.

So if they wasted the opportunity for a decent love or redemption story, we are left with lots of action and lots of unexplained things.

Why did they call it "Inobtanium"? Really? Why not just call it blue Kryptonite and be done with it.

Why do we even need Inobtanium so badly? They never really give more than two sentences to explain the whole reason two tribes went to war over the stuff, yet it's the whole point of the film.

Why can't they find more Inobtanium elsewhere on the moon? They have the capability of shipping soldiers 5 years across the solar system but can't move more than 250 miles to find an alternative site?

So after the lame story, zero charisma from the leading man, and huge plot holes, we are left with lots of fighting, and it is very pretty fighting.

I watched this on my 4k 3D 65" Samsung TV and it looks amazing in every shot, and sounds good too. I listened in DTS-HD uncompressed 5.1 and the distinct sounds of the jungle, animals and machines are all great and add nicely to the atmosphere. Technically Avatar is better than most other spectacle films, equalled only by Pacific Rim (in my humble opinion) and to a slightly lesser extent the two most recent Transformers films.

The battle scenes look fantastic and the 3D helps to accentuate size and scale nicely. Sometimes the Na'vi and the wildlife can look a little plastic, but if that's the worst I can say about a film that's 95% CGI that's really impressive.

If you want something loud and shiny to watch on a Friday night, or want to test out your new 3D TV then you have to get this. If you want something intelligent, challenging and thought provoking you should really look elsewhere.
続きを読む
4人のお客様がこれが役に立ったと考えています
違反を報告
レビュー を日本語に翻訳する
すべてのレビューを参照します
トップへ戻る
Amazonについて
Amazonでビジネス
Amazonでのお支払い
ヘルプ＆ガイド
日本語ショッピングのための言語を選択します。 日本ショッピングのための国/地域を選択します。
© 1996-2021, Amazon.com, Inc. or its affiliates