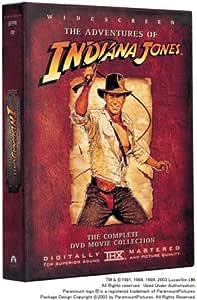 Charles
5つ星のうち5.0 Great films but confusing sets of boxsets.
2015年8月28日に英国でレビュー済み
Amazonで購入
These are all fantastic family films and there are plenty of reviews detailing them, so I`m going to concentrate on the various box sets which often have the same reviews just to confuse you. I bought The Adventures of Indiana Jones: The Complete Movie Collection (released 2003) which has a Spanish set pictured but zoverstocks supplied a UK set as I hoped. Its a THX set and has a specials disk but is missing Indiana Jones and the Kingdom of the Crystal Skull which I bought separately as that was the most economical way to get the full set of films.

The box set Indiana Jones Trilogy (released 2007) appears to be identical to the 2003 release.

The box set Indiana Jones: The Adventure Collection (released 2008) appears to be the same as the 2003 box set but missing the specials disk.

the box set Indiana Jones Complete appears identical to the The Ultimate Collection.

The box set Indiana Jones: The Complete Adventures [Blu-ray] (released 2012) is a remastered version of The Ultimate Collection

Which to buy? if your purchasing on DVD I think best get the 2003 set and add a copy of The Crystal Skull, if buying on Blu-ray & you want the latest re-mastered version, get the The Complete Adventures (2012).
続きを読む
5人のお客様がこれが役に立ったと考えています
役に立った
フィードバックを送信中...
フィードバックをお寄せいただきありがとうございます。
申し訳ありませんが、お客様の投票の記録に失敗しました。もう一度試してください。
違反を報告
レビュー を日本語に翻訳する

Lorenzo Bedini
5つ星のうち4.0 The Old Ones are Still the Best
2016年9月22日に英国でレビュー済み
Amazonで購入
It's never easy to review three films in one go, but comparing the first three Indiana Jones movies with the much more recent fourth, I simply ask myself why they worked where 'The Kingdom of the Crystal Skull' really didn't.
'Raiders of the Lost Arc' is still the best; a classical adventure story with a strong atmosphere, a sense of humour that never gets silly, and the kind of performances one expects from heavy-weight actors in light-weight roles. It does, as they say, exactly what it says on the tin. In its self, 'Raiders' is deserving of a full five stars, not least because the fantasy manages to stay just this side of the credibility gap.
'The Temple of Doom' begins with an object lesson in how to keep the suspense 'ball' in the air for as long as possible without losing the story. The first time I saw it, I remember thinking that there was something almost lyrical in the way one predicament lead to another, sweeping the characters from (I think) Shanghai to 'Somewhere in India' in an effortless stream of adventures. Another plus for this film is that while it involves a large number of child actors, it doesn't slide into the typical Hollywood mush that usually gets served up when children become involved. That being said, it's quite macabre in places, and perhaps the darkest of all the Indiana Jones adventures. Also, my heart bleeds for the actress in the supporting role, whose character was perhaps the most unsympathetic female lead ever written. I know she's supposed to be funny, but it goes beyond that.Enough to make anyone a militant feminist.
'The Last Crusade' runs a close second best to 'Raiders'. Sean Connery handles his comedic role perfectly. (Many years ago at drama college, I was told NEVER to play for laughs. The script is either funny or it's not, and you, the actor, won't make it any funnier by pulling faces or clowning.) Connery, playing the comedy absolutely straight - as, to be fair, does Denholm Elliott - steels every scene he's in. The father-son relationship is handled well, without any schmaltz or general 'drippyness'.
So, to sum up the package of all three? Straight-forward adventure story lines, great casts, ditto photography; the cinematic equivalent to a nice warm bath at the end of a stressful day. As a viewer, like the protagonists, one is asked to make a few leaps of faith along the way, but for your classic 'Boys' Own' style adventure, they can't be beat.
続きを読む
1人のお客様がこれが役に立ったと考えています
役に立った
フィードバックを送信中...
フィードバックをお寄せいただきありがとうございます。
申し訳ありませんが、お客様の投票の記録に失敗しました。もう一度試してください。
違反を報告
レビュー を日本語に翻訳する

Charlene G.
5つ星のうち5.0 Review of The Indiana Jones Trilogy on DVD
2011年6月20日に英国でレビュー済み
Amazonで購入
The Indiana Jones series are great films, especially Temple of Doom - the dinner table scene still makes me laugh. I won't go on about the films here as there are plenty of decent reviews which probably do a far better job.
What really sets this box set off is the bonus material. Most modern films I don't bother watching this as it consists of shots of people poring over computer screens or performing against a green back ground. Back then there was no such thing so all effects required major skill and ingenuity. This includes caves made out of tin foil, and stop motion mine cart animation, none of which can be easily seen when watching the films. The production team clearly had great fun making these films and this is seen by how fondly they all still remember them. For me it makes the whole experience more fun, and more real. The bonus disk includes startling revelations like the budget for Temple of Doom being just $20 million! Amazing, that is what some actors get paid today just to do one film.

xyz
5つ星のうち5.0 Indie the best action hero!
2010年9月5日に英国でレビュー済み
Amazonで購入
A great box set and extras CD from the original action hero. Bought for an eleven year old nephew who according to his thank you letter enjoyed "the bit where the people's faces melted" the best, it also filled a whole day during a wet summer holiday watching the films in sucession with one of his uncles,a serious film buff who was also enthralled. Great classic films, interesting bonus CD and a must for youngsters who missed them first time around or nostalgic uncles! (Actually the best bit is still where Indie is confronted by the sword wielding native who is going to challenge him to some sort of duel. He just stands back and shoots him from 25 yards with a tired expression on his face). Classic moment!
続きを読む
役に立った
フィードバックを送信中...
フィードバックをお寄せいただきありがとうございます。
申し訳ありませんが、お客様の投票の記録に失敗しました。もう一度試してください。
違反を報告
レビュー を日本語に翻訳する

SALLY KATE
5つ星のうち3.0 Great...in English! Languages missing.
2012年10月25日に英国でレビュー済み
Amazonで購入
These films are as good now as they were all those years ago when we saw them in the cinema. My son asked me to order these from Amazon UK as the price was good and the product description said it had lots of languages including Spanish. The set we were sent did not. When I contacted the seller, they offered to replace the set. However, as I live in Spain it would cost me more to return the set than it cost to buy it. Dead end. I'm not satisfied, but living in Spain, there doesn't seen to be much I can do about it.
続きを読む
1人のお客様がこれが役に立ったと考えています
役に立った
フィードバックを送信中...
フィードバックをお寄せいただきありがとうございます。
申し訳ありませんが、お客様の投票の記録に失敗しました。もう一度試してください。
違反を報告
レビュー を日本語に翻訳する

Jo Allsopp
5つ星のうち1.0 Disappointed
2017年3月23日に英国でレビュー済み
Amazonで購入
I bought these dvds for my son. He was excited to watch. At first the film seemed ok but kept getting stuck for about 1/2 an hour on and off in the middle. My son was very disappointed and is not enthusiastic about watching the other two now!
続きを読む
役に立った
フィードバックを送信中...
フィードバックをお寄せいただきありがとうございます。
申し訳ありませんが、お客様の投票の記録に失敗しました。もう一度試してください。
違反を報告
レビュー を日本語に翻訳する

shannon
5つ星のうち5.0 Amazing price, great quality, however, delivery did take a while
2013年9月10日に英国でレビュー済み
Amazonで購入
Brought this collection as a birthday present for my mom and am very happy with the quality and overall condition of the set, however, the delivery did take a while so if you're ordering for a particular event make sure you order two weeks before in order to receive the delivery for the correct time :) Overall I am very happy with this product...despite the long wait the set arrived in great condition and my mom was very pleased with the set...I highly recommend its purchase :)
続きを読む
役に立った
フィードバックを送信中...
フィードバックをお寄せいただきありがとうございます。
申し訳ありませんが、お客様の投票の記録に失敗しました。もう一度試してください。
違反を報告
レビュー を日本語に翻訳する

John J. Allen
5つ星のうち5.0 Smashing collection
2013年3月28日に英国でレビュー済み
Amazonで購入
Bought this box set for our grandson aged 7 who suddenly had a passion for Indiana Jones who he saw as a real hero.
We have watched some of the films with him and they kept us all watching even though the action is a bit far fetched and unbelievable to an adult ...but great fun nonetheless. Great purchase and value for money.
続きを読む
役に立った
フィードバックを送信中...
フィードバックをお寄せいただきありがとうございます。
申し訳ありませんが、お客様の投票の記録に失敗しました。もう一度試してください。
違反を報告
レビュー を日本語に翻訳する