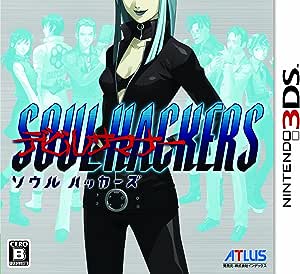 brian
5つ星のうち5.0 I hope Shin Megami Tensei IV will be as good as this one.
2013年3月30日にアメリカ合衆国でレビュー済み
Amazonで購入
Soul Hackers is probably the most successful one in the whole devil summoner, or even the Shin Megami Tensei series. It has been 10 years since it was released on ss and ps1, and yet it still doesn't fail to amuse me on 3DS. At first glance it might seems to be an old-fashioned last-generation RPG, but I guarantee you need only 3 hours to get into it, and then spend some sleepless nights on it. Here are some details:

Graphics: 4 out of 5
Consider it's a game from 10 years ago, I can only say Atlus did improve the graphics, but just don't compete it against other 3DS games. Devils look awesome and characters' faces while on dialogue are decent. Extra points to the awesome-all-the-time devil design, afterall, it's Shin Megami Tensei.

Music: 3 out of 5
Decent, not a single song being annoying, nor did one make me searching for OST like crazy. Match the scenes.

System: 5 out of 5
This is what Shin Megami Tensei fans would go crazy for. Battle system is balanced, strategic, interesting and addictive. Once you understand and are eager to build your own team, the possibility is infinite. Blindly leveling up wouldn't do you any good, instead if used well, an extremely weak team can own the boss. Also it's a friendly RPG. Save anytime anywhere, dungeons have their maps shown all the time, adjust battle difficulty anytime, able to skip dialogues.

Overall, this is one of my favorite on 3DS. Shin Megami Tensei IV is coming out and I pre-ordered it, mostly because this one from the same series is good enough to convince me to buy the newest release for no reason.

Finally, a big WARNING, Nintendo has its region restriction policy, so the Japanese version of this game can only be played on an japan-imported 3DS, which I brought through proxy website. For those who are interested, go for the English version coming out at April 16, 2013. The fun is all the same.
続きを読む
1人のお客様がこれが役に立ったと考えています
役に立った
フィードバックを送信中...
フィードバックをお寄せいただきありがとうございます。
申し訳ありませんが、お客様の投票の記録に失敗しました。もう一度試してください。
違反を報告
レビュー を日本語に翻訳する