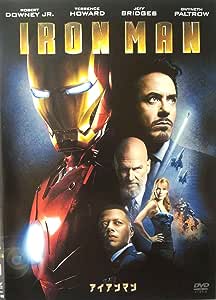 Katitude
5つ星のうち5.0 The Beginning of the Marvel Cinematic Universe
2019年3月14日に英国でレビュー済み
Amazonで購入
Marvel had produced many films before Iron Man with varying degrees of success. Just like doing a bit of DIY, sometimes they managed to bend the nail, but with Iron Man they hit it squarely on the head.

Kicking off the film with a incredible opening sequence, viewers get to see action from the start and let the story unfold from there. The billionaire playboy, Tony Stark gets a rude awakening when he is attacked by the very weapons he created. Using his genious however, he comes to understand that he has the power to begin to fight those whom attacked him.

By the end of this action packed, story driven masterpiece, you are left wanting to see more, not just of Robert Downey Junior but also of what Marvel can do. Iron Man is the beginning of the much larger story that is the Marvel Cinematic Universe (MCU)
続きを読む
3人のお客様がこれが役に立ったと考えています
違反を報告
レビュー を日本語に翻訳する

Mike
5つ星のうち5.0 Great movie, outstanding blu ray
2016年4月13日に英国でレビュー済み
Amazonで購入
This is how it all began. Iron Man was the first movie based on a Marvel superhero actually produced by Marvel, and as such was the first instalment of the rapidly expanding Marvel Cinematic Universe. Iron Man was perhaps a strange choice as outside comic book geekdom he probably wasn’t the best known superhero – certainly not universally known like Superman, Batman and Spider-Man – but that didn’t stop director Jon Favreau forging a brilliant movie that catapulted the character to international fame and set Marvel’s ball well and truly rolling.

Iron Man is by no means a perfect film (I would have preferred to see more set pieces with the Mark III armour, and it does end with a fairly predictable mano-a-mano bash-up between Stark and his nemesis), but the flaws are outweighed by all the good stuff. The decision to cast Robert Downey Jr as Tony Stark was inspired; his charismatic, witty performance is a joy to watch and he really makes you believe that he could invent all this implausible technology. The scenes showing Stark developing the suits are brilliant and often hilarious. The supporting cast is also superb; the banter between Downey and Gwyneth Paltrow is marvellous, and Jeff Bridges is a seriously imposing presence as Stark’s father figure-cum-opponent. Terrence Howard is also fine as James Rhodes though I prefer the Don Cheadle interpretation of the character in later movies.

However the real stars of the show are the brilliantly realised suits. Stan Winston’s team did a truly remarkable job creating beautiful, practical suits, which are supplemented by almost flawless visual effects work. A few more scenes with Iron Man in action and a more inventive finale would have made this a five-star classic, but it’s still damn good fun.

Technically the blu ray release is superb: picture quality is almost flawless, though as often seems to be the case with Paramount releases I found myself having to turn the volume up more than usual.

If you’re going to get this movie on BD you have to seek out the 2-disc Ultimate Edition. Sadly this is no longer being made so you’ll have to look on eBay or find a private seller on Amazon, but the difference between it and the 1-disc version currently available is like night and day. On disc 1 you get a 40-minute history of Iron Man, deleted scenes and the rather pointless interactive ‘Hall of Armour’, while disc 2 features a brilliant in-depth ‘making of’, a VFX documentary, Downey’s screentests, storyboards and galleries. Although I’d give the movie itself 4 stars, the extent and quality of the bonus features easily bump this set up to the full five.
続きを読む
2人のお客様がこれが役に立ったと考えています
違反を報告
レビュー を日本語に翻訳する

Robyn B. Mcgorm
5つ星のうち5.0 Great Adventures
2014年12月21日に英国でレビュー済み
Amazonで購入
With fabulous actors doing this movie and the story is marvellous with that, How the world can you go wrong. I found this to be very interesting and different and something that makes you wonder can this really happen. When my earlier years I could buy the comic books of superman, Phantom and all the others but never had the interest until just the last few years that has had me sit up and take notice. The impossible is still impossible but you never know what's around the corner do we. Captured and using his only talent as a genius to escape, he builds a suit of armour and becomes our hero. I have missed out on a few things but I'm taking a short cut as I have more reviews to do, I rated this an A grade plus for full on action and adventure that has you marvelling at what he can do and we can't. Hurry now as you wont want to miss out on this as it will have you glued to the chair, relaxing with your popcorn in one hand and a drink in the other don't forget to put your feet up. Enjoy!
続きを読む
2人のお客様がこれが役に立ったと考えています
違反を報告
レビュー を日本語に翻訳する

Elleppi
5つ星のうち4.0 A brilliant mix of superhero stuff and classic screwball comedy style. Best film of the saga
2015年10月3日に英国でレビュー済み
Amazonで購入
First and best film of the saga, this Iron Man is truly a refreshing new piece in the world of marvel films.
Maybe due to the background of the director as a comedian and to the presence itself of Robert Downey, this film has a certain brilliant side that reminds a lot of screwball comedies, that surprisingly naturally cohabits with the action side.
The result is a curious and smart mix of genres and an interesting visual look, that switches from classic 50ies style to almost live action and documentarian moments (the first scene when the Iron man reveals coming out of the cave in the desert) to videogame-hitech scenes.
The duet between Downey and Paltrow is brilliantly conducted and focuses on a constant romantic and sexual unresolved tension (as in the best Wilder and Hawks old comedies), while Jeff Bridges is quite believable in the role of the villain.
The blu ray is definitely good.
Surely one of the best comis heroes based films
続きを読む
2人のお客様がこれが役に立ったと考えています
違反を報告
レビュー を日本語に翻訳する

A. Page
5つ星のうち4.0 IRON MAN BLU RAY
2012年4月27日に英国でレビュー済み
Amazonで購入
First of all the moan AMAZON PLEASE STOP MERGING YOUR REVIEWS, IF I CLICK ON A BLU RAY I WANT TO READ PEOPLES REVIEWS OF THE BLU RAY (PICTURE, SOUND, TRANSFER) NOT 200 REVIEWS FROM A YEAR AGO ABOUT THE DVD, how difficult can it be to sort out. Right, well as you expect the picture quality on this disc is superb but it's the sound I have an issue with, the 'True HD' through my Philips sound bar in my humble opinion makes for a very lacklustre experience. Perhaps I have something set up incorrectly although my sound bar has limited settings, it's also the only disc out of 50 or so blu rays I have that turns my DTS off and dulls the sound, compared to some of the discs that are quite amazing and shake my living room. I've not watched it with a proper 5.1 system so I can't comment. All in all, great movie, superb picture quality, just wish it had the same sound options as all my other discs.
続きを読む
5人のお客様がこれが役に立ったと考えています
違反を報告
レビュー を日本語に翻訳する
すべてのレビューを参照します
Amazonプライム会員ならお急ぎ便、日時指定便が使い放題
さらに、映画もTV番組も見放題。200万曲が聴き放題 。クラウドに好きなだけ写真も保存可能。
> プライムを無料で試す