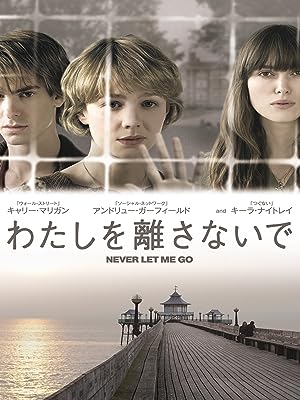 Legal Vampire
5つ星のうち4.0 Good but bleak and intellectual
2021年1月14日に英国でレビュー済み
Amazonで購入
I am very glad I watched this film, which stands up to viewing again. Carey Mulligan and (in a smaller part) Sally Hawkins are as usual both good in this.

However, this is not a film for everyone. If you have not seen it before and are thinking of buying it, be aware that although 'Never Let Me Go' begins as though it could be a mystery with a dash of science fiction thrown in, it does not end up like that. This is really an intellectual 'art' film. As many intellectual 'art' films do, it ends sadly, offering no real hope for any of the main characters or other people in their situation.

Based on a novel of the same name by Kashuo Ishiguro, which is apparently a GCSE set book now, the author has said that he intended the characters' fate, destined from childhood to be sacrificed to the medical needs of others, as a metaphor for how we are all destined to die and cannot escape that. Hence in the film the victims, once they understand what is going to happen to them, do not rebel and make only limited efforts to escape, which baffles some viewers.

Others complain that it leaves out much that is in the book, but what do they expect, a 5 hour film? It is normal to have to cut and change things to fit the practicalities, including time constraints, of film making.

For all that, a good film for those who can enjoy intellectual art films with bleak endings, which I don't always, but do when they are as well-made as this one.
続きを読む
1人のお客様がこれが役に立ったと考えています
違反を報告
レビュー を日本語に翻訳する

BigAl82
5つ星のうち4.0 Dark, depressing drama but with Andrew Garfield so yay!
2014年7月15日に英国でレビュー済み
Amazonで購入
I bought this film for one reason. And one reason only. And that reason would be: Andrew Garfield. Ever since I first clapped eyes on him in Boy A I have been transfixed by him. Not only is he a terrific actor but he's also strikingly handsome too. This film us really quite good. There's no explosions or guts spilling but it's not about that. This is a drama pure and simple based upon a novella. The film is entirely watchable and even entertaining. The tone is rather bleak and there's no happy ending. However even the presence of that woman can ruin this film. And Carey Mulligan is a wonderful actress. I must warn you this is not an easy watch it piles on layers and layers of melodrama but it's something I like. Despite it's 12 certificate there's a fair amount of sex but nothing explicit. Ultimately a satisfying watch then? Well yes and no. But don't take my word for it. See for yourself.
続きを読む
4人のお客様がこれが役に立ったと考えています
違反を報告
レビュー を日本語に翻訳する

Glilla Bear
5つ星のうち4.0 Thought provoking - and presumably true to Ishiguro's intentions
2012年7月19日に英国でレビュー済み
Amazonで購入
Kazuo Ishiguro is one of the executive producers of this film, and I presume therefore that the film met with his approval. It is a thought-provoking insight into the logical outcome of 'spare-part' surgery, placed in a curious mix of present and future. I confess to not having read the book, but the fact that I know the film's conclusion would not deter me from doing so. After all, the film takes itself as a piece of art, and does knowing how, say, a Tschaikowsky symphony develops and ends prevent us from wanting to listen to it or study the score? All three adult performances, together with those of the children at Hailsham (Ham House) are outstanding, though I found Ruth's brand of cruelty, tenderly presented - probably an intentional trait - rather disturbing. Rachel Portman's music becomes more and more intrusive, until, at the end, it drowns out everything rather like very poor Vaughan Williams without the musicality. This attempt to 'enhance' the inevitable sadness of the film's conclusion is quite superfluous, indeed counter-effective. I'd certainly recommend the flm, though.
続きを読む
1人のお客様がこれが役に立ったと考えています
違反を報告
レビュー を日本語に翻訳する

Luke Thomas
5つ星のうち3.0 Good performances but the story meandered around it's point
2020年2月13日に英国でレビュー済み
Amazonで購入
This was quite sad but also very beautiful. I do feel like some parts were rushed and there definitely could have been more memorable character moments. The story was handled well for the most part though, and I liked the writing. I think it often felt a bit hollow, as though the meaning was a bit lost along the way.
The acting was good by all and there are some lovely shots.
I think I'll appreciate this film more on repeat viewings.
続きを読む
1人のお客様がこれが役に立ったと考えています
違反を報告
レビュー を日本語に翻訳する
すべてのレビューを参照します
トップへ戻る
Amazonについて
Amazonでビジネス
Amazonでのお支払い
ヘルプ＆ガイド
日本語ショッピングのための言語を選択します。 日本ショッピングのための国/地域を選択します。
© 1996-2020, Amazon.com, Inc. or its affiliates