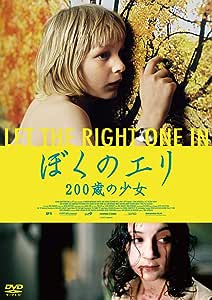 Albatross
5つ星のうち5.0 Nice take on the whole ‘vampire myth’
2017年2月24日に英国でレビュー済み
Amazonで購入
Sometimes you may wonder if every different version of those infamous blood-suckers hasn’t already been done to death. The big screen has had every incarnation from a planet run by vampires (Daybreakers) to vampires that came from space (Lifeforce) and twinkling vampires (that franchise that cannot be named). So, here we have a Swedish offering based on the book of the same name – ‘Let the Right One in.’

It’s set in the eighties if you’re wondering where the ‘bad’ haircuts came from and we’re introduced to a young lad who is being bullied at school (Oskar). Now, rather than tell a responsible adult about his troubles, he enlists the help of the ‘new kid on the block’ (Eli). And, it just so happens that the little girl who has moved into the flat next door is full of secrets – mainly associated with the blood-thirsty deaths that have been happening in the community ever since the girl moved into the neighbourhood.

I can’t compare the big screen adaptation to the book as I haven’t read it, but it certainly is an ‘earthy’ take on vampires. By that I mean that if you can suspend your disbelief to appreciate immortal bloodsuckers living among us, then you will be able to believe that this is probably how it would go.

It’s a pretty bleak film, not just in content (killer-child vampires are hardly happy-go-lucky types), but also in look and feel. The snowy setting is quiet and eerie and also used to perfection to create a look and feel for the film. There’s plenty of great shots that are brilliantly-framed and even have a slight ‘Kubrick-feel’ to them (my opinion, anyway).

‘Let the Right One in’ won’t be for everyone. It’s hardly fast-paced and you’ll have to put up with the subtitles (those foreign films, eh?). Plus there is a decent amount of gore and red stuff flying here and there. I noticed a couple of slightly cheap-looking CGI effects in there, but I’m guessing the film didn’t have the budget to do any better and I can forgive those on account of the overall story and feel.

There is an American remake out there and it’s not that bad either, however it’s so similar that if you like the sound of this sort of deep, slow, arty vampire tale then you might as well just watch the original.
続きを読む
10人のお客様がこれが役に立ったと考えています
違反を報告
レビュー を日本語に翻訳する

ScotsmanReviews
5つ星のうち5.0 Brilliantly Beautiful
2020年10月21日に英国でレビュー済み
Amazonで購入
This is a beautiful, breath taking and captivating take on the "vampire" genre. It has easily become one of the best movies I have ever watched. The premises, the plot, the acting...everything is perfect.

Its not your typical horror but it goes deeper exploring love, loneliness, the pain of immortality and having to do what is necessary to survive.

The two main characters (Oskar and Eli) while being young are brilliant actors! The movie will make you question your morals and ask how you would feel.

If you haven't seen LTROI you need to watch it today, it is a rare event to find a gem like this. I just wish there was a sequel to follow what happened next with Eli and Oskar. The directors commentary on the disc is also very good and worth a watch.

Finally as this is based on a book with the same title, I would recommend you read it also - its an amazing book that adds even more substance to the movie.

Darth Maciek
5つ星のうち5.0 Now THAT is a vampire movie as they should be done: dark, grim, cruel, disturbing, vicious, tragic - but beautiful!
2013年10月23日に英国でレビュー済み
Amazonで購入
This Swedish vampire drama (I do not consider it a horror film) is an absolute MASTERPIECE! Below more of my impressions, with very limited SPOILERS.

Oskar is a gentle (in fact maybe a little too gentle) 12-year old boy living with his divorced mother in Stockholm suburbs. Bullied at school and a loner by nature, he likes to stay late outside - alone, if he can help it. One evening he meets there Eli, who appears to be a girl roughly the same age as he. Eli is very pale, very calm and a little bit odd - but from the beginning "she" seems to like Oskar. A lot. This is the beginning of this amazing film, and of the rest I will say no more.

This is a slow moving film, ultimately without much action - but I guarantee that you will not feel the 114 minutes of this movie! At the end, far from being bored, I really regretted that there is not more of it...

This also is a somehow disturbing film, which was even censored by removing some scenes to be allowed for TV distribution in USA. It was adapted from a 2004 novel, which is much more disturbing - in fact it is absolutely abject - so even the Swedish producers changed the story a lot, to be even allowed to distribute this film in the theaters. But even with changes it is a film only for those 18 or above! The official UK rating of "15" is in my modest opinion far too liberal!

This film respects most of vampiric cannon (do not expect vampires walking under the sun here, etc.) although not necessarily all of it - the question of crosses and holy water is carefully avoided...

This film is so good, that even its American remake "Let me in" was very honest, even if of course it couldn't beat the original.

I will stop here to avoid any temptation of giving more spoilers. I absolutely ADORED this extremely dark and ambiguous tale and I recommend it with enthusiasm! Enjoy!
続きを読む
9人のお客様がこれが役に立ったと考えています
違反を報告
レビュー を日本語に翻訳する

Steve Sherman
5つ星のうち4.0 All the reviewers are right, sort of
2014年1月28日に英国でレビュー済み
Amazonで購入
This film was bound to be controversial because it will meet no one's preconceptions or expectations. Consequently nearly all of the reviews I've read here (the exceptions will be obvious) have valid points to make, though only a few have jumped over their own shadows far enough to appreciate the film's real complexity.

Is it a horror film? Yes, the female (sort of) protagonist is a monster who needs blood to live and kills without compunction, despite an early perfunctory moment of remorse. And the male protagonist is a bullying victim who is perhaps on the verge of taking bloody revenge on his tormentors even without her encouragement. But...

Is it a love story? Yes, because the two leads come into each other's lives at a crucial moment: his, when he is feeling most alone, not only at school but also increasingly alienated from his divorced parents; hers, when her human servant is just about to outlive his usefulness and leave her bereft of any vestige of contact with another being. So is it really love, in the sense of an involvement in the life of another, or is purely selfish? This is where the complexity comes in. My own answer is a firm and forthright maybe.

Why might you like this film? Read the five-star reviews, I have nothing to add to them.

Why might you not? Read the one- and two-star reviews, especially antaylor's. If you have low tolerance of ambiguity, steer clear. A point I would emphasize more than most reviewers have is the pacing. I've knocked off a star in my own review because of directorial self-indulgence: too many scenes are three to five seconds too long because he lingers on the final composition for no good reason. Call it the Lars von Trier school.

If you do watch this film, I would add this: Stockholm's winter nights are very short, a vampire's paradise. Think of the northern tip of Scotland.
続きを読む
4人のお客様がこれが役に立ったと考えています
違反を報告
レビュー を日本語に翻訳する

JB
5つ星のうち5.0 Brilliant Swedish vampire film
2015年1月1日に英国でレビュー済み
Amazonで購入
Let the Right One In (Låt den Rätte Komma In) is a Swedish vampire film, based on the John Ajvide Lindqvist novel of the same name. Rather than focusing on horror and gore as more traditional vampire films tend to do, this film instead examines the unlikely relationship between Oskar, a shy 12 year old boy, and his new neighbour Eli, a pale girl who also happens to be a vampire. The title refers to Eli being unwilling to enter Oskar's home unless he properly invites her in, for reasons which are detailed later on in the film.

The acting is superb throughout, with incredible performances from the two young actors Kåre Hedebrant (Oksar) and Lina Leandersson (Eli). The cinematography is beautiful, and there is a brilliant juxtaposition between the serene Swedish landscape and the dark, gory subject matter.