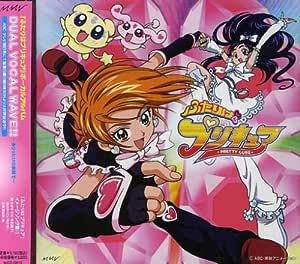 Don Joeski
5つ星のうち5.0 DUAL VOCAL WAVE!!
2013年7月17日にアメリカ合衆国でレビュー済み
Amazonで購入
To start with, here are the tracks, translated as close as I could manage:

I wanted to put the Japanese titles in, but this review would mess them up (apparently the interface does not use Unicode encoding). You will have to check elsewhere for the original-language titles.

These are songs from/related to the anime Futari wa Pretty Cure, which you may find called Pretty Cure. I positively love this show, so I sought this out because I figured it would have a good selection of songs from it. Amazon is one of the few places that has this album in stock. Tracks 1 and 11 are the opening and closing songs, at the same length as they appear on the show (except the little instrumental refrain of the opening right after the song). Number 3 is the very dramatic song that plays in episode 40-something, as Nagisa and Honoka go looking for Dotsuku Zone. Although the other songs are played in the same style by the same artists, I don't remember any of them actually in the show. All I can say for sure is that they have some extremely familiar-sounding musical themes.

"DUAL VOCAL WAVE!!" is the perfect name for this album because, not only is it an awesome play off of the name of Pretty Cure's transformation move, "Dual Aurora Wave", but all the songs have singers (5 and 8 are duets, and 9 is sung by a chorus); this is not a soundtrack with any background music. I was hoping for some background music, particularly during the Pretty Cure transformation, but apparently I'll have to get another album for that. This album will have more impact to those familiar with the show, and more meaning to those who recognize any Japanese (describes me only a little bit), but even so, the themes of love and friendship and fun transcend language. I can honestly say that I would recommend this music to anyone who wouldn't tease me about it. Unfortunately, being a man around the 2-decade mark, most people probably would.

You may want to check out the show itself on Amazon instant video (or certain other video rental sites). And if anyone influential is reading, I would LOVE to see the series and its sequels released on DVD in North America.
続きを読む