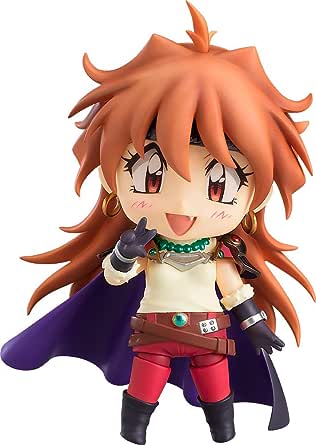 VVonD62
5つ星のうち5.0 The Dragon Spooke-- errr Beautiful and Genius Sorceress Done Right!
2019年4月25日にアメリカ合衆国でレビュー済み
Amazonで購入
Ahhh, Slayers. I'll admit I don't watch a lot of anime (I can count the ones I've watched on one hand) but something about Slayers seemed really interesting. One and a half seasons later, I'm hooked. The first thing I look for when getting into a new series is good merchandise. Luckily, I found a good figure in the form of this Nendoroid. I've only owned two Nendoroids before this and I thought they were pretty fine. Nothing great but definitely fine. Still, this was the only option for a modern figure of Lina Inverse so I thought, why not? Now that I own it, how do I feel? Surprisingly very positive. Read on to find out why.

Sculpt:
It's a Nendoroid so it's obviously not going to be 100% faithful to the source material in terms of proportions. That should go without saying but I'll say it anyway. Now that we've gotten that out of the way, I gotta say that the sculpt is really nice! Even with the small body, there's a lot of sculpted detail. I especially like the shoulderpads. Lots of little details in those like the multiple layers, the gems, and other bits. Now what really makes a Nendoroid a Nendoroid are all the faces they come with. Lina here has four. One with a wide smile, the same wide smile with a wink, eyes closed as if she's concentrating, and then a yelling face. That's a lot of faces. All of them are really expressive. I'd say the smile and yelling faces are my favorites. They're really expressive and the yelling one is quite versatile. She could be angry, shocked, or just exasperated. It's great. As expected for a Nendoroid, they're quite cute too. The hair is very nicely sculpted and almost sharp. You could puncture something with it! One more thing to note is that Lina here is depicted in her costume from the OVAs rather than the anime. I prefer the anime look but the OVA costume still looks nice.

Paint:
No surprises here, it's very good. There is very little slop and all is painted as it should be. One great detail is that her headband has individual runes painted on it. Only slip up I can see is that they missed some red paint on the pants between her two belts on her left hip. Not a big deal at all.

Articulation:
You get 13 points depending on how you look at it. Her head is on a revoltech type balljoint that allows for a good amount of movement from all angles, her arms are basic swivels, her wrists are basic swivels, the top of her gloves also rotate, her waist swivels, and her legs are on two more revoltech type joints. Where do the three other pieces of articulation come from? Well her shoulder pads are on ball peg joints that allow them to move freely and her cape is on another revoltech style joint that allows for a whole lot of movement. I love that they did this. The shoulder pads are easily moved out of the way so you can move those arms almost anywhere you want! The cape is also unobtrusive and in the right pose it can look quite dynamic, especially for a Nendoroid. There's not a lot of articulation though so how are you supposed to do a lot of different poses? Well...

Accessories:
Nendoroids don't have traditional knee and elbow joints. At least not typically. I know some do but Lina isn't one of them. Instead, you achieve poses by swapping out parts and Lina has a lot of them. She has two arms with bent elbows, a bent elbow in a different angle meant specifically for her right side, two straight arms, two more straight arms engineered in a way to make it so she can point them directly forward, and an arm meant for her left side that makes it so she can hold her sword. That sword arm is the only one with her glove actually attached to it by the way. Did you get all of that? Good. She also has one bent leg. In terms of hands, she has two gripping hands for her sword, two open hands, two more open hands that are at a different angle, a hand with a translucent red ball, and a peace sign hand. The hand with a translucent red ball is meant for her when she's charging up a Dragon Slave. Sounds like a lot so far? There's still more. Of course there's the four faceplates we talked about. There's also an alternate head piece with her hair shooting upwards, a blast effect, two aura effects you place around her on the ground, and the previously mentioned sword. This is the Sword of Light beefed up on the Giga Slave. Wish they had included the regular Sword of Light but that was a GSC exclusive apparently. Of course, there's also the requisite Nendoroid stand and a stand for her blast effect. As you can tell, Ms. Inverse is LOADED with accessories. There's a lot here and it's hard to choose which way to display her. There's so many variations! This technically isn't an accessory, but she also has a sword holstered on her back that pops off. It pops out really easily and I'm honestly not going to display her with it. Just a word of warning.

Overall:
Nendoroids aren't really my thing but boy does Lina make me want to change my mind. Everything about her is almost perfect when you know what you're getting into. If you want a super articulated 6 inch scale Lina Inverse, this isn't for you. Pray for a Figma. However, if you want a cute figure with a lot of accessories that's really expressive? Then get this! If you're a Slayers fan then support this line! Show Good Smile that you want more! We're already getting a Naga the Serpent but I'd love to get a Gourry too. Heck, if it does really well we could even have a chance at Zelgadis and Amelia too. Even if we don't, I'm still happy with Lina and I'll almost certainly get Naga too.

Edit: A hairline fracture has appeared on the joint that connects the cape to the back and it splits apart really easily now. Were it possible I'd retract half a star for this. Don't think it's worth retracting a whole star as it was easily fixed with a replacement joint but be careful!
続きを読む
違反を報告
レビュー を日本語に翻訳する

C. Ryan Wallace
5つ星のうち5.0 The nostalgia came flooding back.
2019年6月25日にアメリカ合衆国でレビュー済み
Amazonで購入
I found and watched the Slayers series during my time at college, but I had forgotten about the other short series of ovas. I am very happy to have the nuker of bandits on my shelf.
続きを読む
違反を報告
レビュー を日本語に翻訳する
すべてのレビューを参照します
Amazonプライム会員ならお急ぎ便、日時指定便が使い放題
さらに、映画もTV番組も見放題。200万曲が聴き放題 。クラウドに好きなだけ写真も保存可能。
> プライムを無料で試す