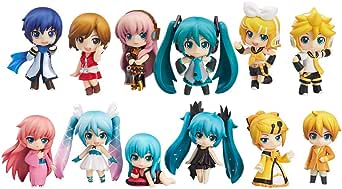 Mik
5つ星のうち3.0 Not what I expected, but "worth" the money in some aspects. Also, be warned there are bootlegs out there!
2015年4月3日にアメリカ合衆国でレビュー済み
Amazonで購入
This was definitely not what I expected. Let me clarify what I mean.

Having bought over 20 nendoroids in the past, these are not as well made as regular nendoroids; however, they are still legitimate. They have more issues w/ joints and paint transfers (sloppy paint jobs) than nendoroids.
My deep sea miku had really loose joints, so almost nothing stays on; the other ones are okay. But the regular miku (for mine) had a bad paint job on the back of her skirt. Thus, I don't think these go through the same levels of quality checks as regular nendoroids, but they're still overall nice.

The face decals are pretty good. Very rarely, you'll see one or two misplaced by a few millimeters.
I don't know if I'd ever buy these again, but as a one time thing and for the price, it's decent. Buy this set if you like vocaloids, don't mind having slightly lower quality than regular nendoroids, and want to own many petites at once.

As a last note, ,there ARE bootlegs of these out there. Be careful! BUT the bootlegs are SO BADLY PAINTED you'll know immediately if it's fake. It'll look nothing like the picture shown. If it resembles in some way, but has a few paint transfers badly done here and there, it's still legitimate. If the hair color is wrong, and the eyes look dead, it's fake. Be warned, the legitimate box also has grammatical errors in English, but I think that's just something that can't be helped when buying foreign goods.
続きを読む
役に立った
フィードバックを送信中...
フィードバックをお寄せいただきありがとうございます。
申し訳ありませんが、お客様の投票の記録に失敗しました。もう一度試してください。
違反を報告
レビュー を日本語に翻訳する