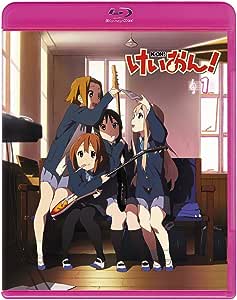 bozeman1941
5つ星のうち5.0 Great Fun, especially if you are into music!
2012年3月28日に英国でレビュー済み
Amazonで購入
I bought all the other blu-rays in this series (currently up to no. 4) after getting this - it is really good fun! The story follows initially four (later five) high-school girls who form a band in an after-school club, and the ups and downs of their progress in life, school and the world of music. The characters, Yui (guitar - Les Paul Standard), Mio (bass - left-handed, 3-Colour Sunburst Fender Jazz Bass), Tsumugi (known as Mugi - keyboards - Korg Triton Extreme 76-key keyboard) and Ritsu (known as Ricchan - drums - yellow Rick Marotta Signature Yamaha Hipgig drum kit), are all lovable and cute, and musicians will appreciate a lot of what they go through in their efforts to make it into music big-time. Later episodes see another band member, Azusa, adding a second guitar (Fender Mustang) to their line up. The story is detailed, innocent, cute and funny - I loved it! Highly recommended, whether you are a musician or not!
続きを読む
役に立った
フィードバックを送信中...
フィードバックをお寄せいただきありがとうございます。
申し訳ありませんが、お客様の投票の記録に失敗しました。もう一度試してください。
違反を報告
レビュー を日本語に翻訳する

Genaro H. Ugalde
5つ星のうち4.0 It's a nice little show I can enjoy with my kid.
2014年2月10日にアメリカ合衆国でレビュー済み
Amazonで購入
I don't know to whom the show is supposed to be geared towards by description or intent. What I do know is that this is one of the only shows I can enjoy with my little girl. In the entire list of anime in my library this is one of the few that her and I can watch without me fearing for inappropriate content and adult humor popping on screen. It's funny and lighthearted and not boring, which is hard to find since pleasing adults and children is not an easy balance to pull.

I can recommend this for parent who like anime and want something to watch with their kids. Its good enough that it can get other audiences but that's the reason I liked it.

BakaRangerGreen
5つ星のうち5.0 Good simple fun
2012年5月4日にアメリカ合衆国でレビュー済み
Amazonで購入
K-on! Volume 1 Review
The first volume of this show does give a nice and entertaining take on the manga by Kakifly.
On Bluray the quality is stunning crisp and clear nice step up from the im sure great DVD resolution, I found the songs in the opening and closing to be fun and rather cute.
Now comes to the meat to some fans, the English dub suites the needs well for those of us (myself included) who cant always look at the screen to read subtitles or a lack of know how to speak Japanese.
While Yui's voice is a bit high at times it still works well, the VAs of Ritsu, Mio and Tsumugi DO fit their characters well. Some can argue that the voices `don't fit' and that it is fundamentally `better' in the original language. However do keep in mind the company didn't HAVE to bring this great series over.
I have noticed they have chosen to go for American Dollars over Japanese Yen, Yui's Guitar cost
250,000 Yen, yet Mio says $2,500, this isn't too large a deterrent however but a nice nod to those that can't get conversions.
Overall however I am impressed with this anime, nice packaging good quality. If you're a fan of the original manga or just want something cute, give this a go.

A
5つ星のうち5.0 Happy Buyer!
2014年10月3日にアメリカ合衆国でレビュー済み
Amazonで購入
Laughs, squeals, and quiet enjoyment. K-ON! truly was enjoyable. The wacky characters were cute and funny enough to keep my attention in this slice-of-life anime. These four girls band together (literally) to keep the light music club from being disbanded, practice, and really rock! If you enjoy moe, giggles, and cute/rock music think about K-ON!

The order came sooner than expected, no flaws, no problems.

Masashi Shirasawa
5つ星のうち5.0 pretty fun
2014年1月1日にアメリカ合衆国でレビュー済み
Amazonで購入
It's very interesting for me to overlook them in music and school life.
Heroin is very clumsy and out of concentration.

But the taste of this anime very calls attention to me.
It makes me at home.
.

J0hn Sm1th
5つ星のうち5.0 The 'Light Music' band finally comes on stage!!
2011年3月4日にアメリカ合衆国でレビュー済み
Amazonで購入
Although I have no intention of counting one's chickens before they've hatched, at least I could say it's exactly a good thing that Bandai Ent. is finally launching this highly anticipated series on Blu-rays.

The problem here is apparently someone messed up the Product Details above. It says only Japanese audio is available while it also saying this title is dubbed, and 66 minutes running time is too short to hold even three episodes.

As I checked with the manufacture's web site, this title has English dub as well as the original Japanese audio with the English subs. It also says the volume #1 is to contain the first four episodes of the series.

I gave 5 stars based upon that information. However, I still strongly recommend you to be cautious before you order this item (If it contains only three episodes, 4 stars at best).

Darling Suicide
5つ星のうち2.0 Changes of Heart (TSUBASA WO KUDASAI??)
2011年4月28日にアメリカ合衆国でレビュー済み
Amazonで購入
Its hard to not give this DVD a 1 star. While I've never taken myself for an uptight purest when it comes to anime (other than DBZ), I have to say this realease was bad.

The voice acting was actually pretty damn good in my opinion. However, I feel that most of them end up sounding alike as you keep watching. Makes it tough to identify them as individuals. I feel they have more character in Japanese, because their voices are simply more unique and different from another. In this only Yui's voice is drastically different. Mio, Ritsu and Mugi all sound good, but nothing really unique.. especially between Mio and Mugi. I feel they were going too hard for a "soft" voice cast.

All in all the dub is good and not my gripe. My gripe, is that in the first episode while performing for Yui to convince her to join K-on, Bandai changed the song. The original was Tsubasa Wo Kudasai cover, a legendary song all around the world. I understand it may have to do with license issues, but I'm sure they could've kept it if they were anything less than "lazy" in this production. I understand cutting such corners helps the wallet, and most English speakers may not be familiar with the song, but its a pretty big scene for fans of the series.

Not to mention, other studios have had the song in their releases, no problems whatsoever. Like Evangelion 2.22, which has the song cover by Megumi as the final battle's theme.

Honestly speaking, the Tsubasa wo Kudsasai cover in the first epsidoe is one of my favorite K-on moments, if not my favorite altogether. and it was the moment I was most looking forward to watching when I bought the DVD. Then it began, and I was shocked. The replacing song is not even attempting to sound similar either.. they could have at least took the original song and changed some notes to give you a familiar vibe.

Although when Yui says "you guys aren't that good", the line feels much more fitting now that they put that terrible replacement song insert.