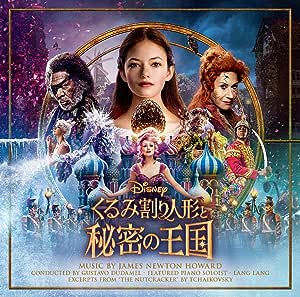 Lewis
5つ星のうち1.0 Can I return the cd to get a replacement cd
2019年5月20日に英国でレビュー済み
Amazonで購入
I bought a nutcracker and the four realms cd
And the inside was broken a crack on the case
And the disc was loose

Charles R. Fox
5つ星のうち5.0 Simply The Best
2018年10月30日にアメリカ合衆国でレビュー済み
Amazonで購入
Mary Poppins said, “ A thing of beauty is a joy forever” and this is a thing of beauty! I feel Meistro Howard’s musical approach is unique, individual, and strikingly different then other soundtrack composers. This soundtrack is several beautiful tone poems all different, all truly beautiful. It is 5 days before opening, so no way to see how the ‘applied’ musical statements fit the screen play, but my interest is only in the music from the ‘musical absolute’, and most tracks are stand alone gems. Meistro Howard’s use of musical statement of sentiment is unmatched. Each new soundtrack seems to push further into sound musical development for music’s sake, and the applied portion works as it does. When a new soundtrack of his comes out, it is weeks of study, following his development. Sadly, with many current composers, there is one or two main statements, rehashed, again and again, but with this composer, not so! This is truely a working out of musical sentiment into a great musical structure of expression.
Meistro Howard’s 2015 Violin Concerto was released on Erato the 16 of this month, but as yet unavailable on Amazon. Truely stunning, and very ‘tonal’ for a new work, but that seems to be his voice, a voice from the past, holding on to the harmonic structures of the highest orders, while using the latest technologies.
In just over two weeks, the next offering is to appear, the second installment of Fantastic Beast, the first being truely a marvel.
I love music, and music must move me, heal me if you will. Having only listened a few times today, I know already I will be savoring this over and over. Everyone is different, but if you love music, this is ‘Fortune and Glory, Fortune and Glory!’

R. D. Packer
5つ星のうち5.0 Gorgeous!
2018年10月30日にアメリカ合衆国でレビュー済み
Amazonで購入
Just received this cd today and am playing it and it is gorgeous! I knew I would love it. Looking forward to the movie! I highly recommend this! This music will transport you to magical realms!
続きを読む
5人のお客様がこれが役に立ったと考えています
役に立った
フィードバックを送信中...
フィードバックをお寄せいただきありがとうございます。
申し訳ありませんが、お客様の投票の記録に失敗しました。もう一度試してください。
違反を報告
レビュー を日本語に翻訳する