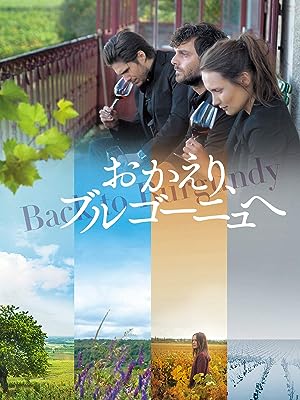 J. L. Sievert
5つ星のうち5.0 Blood and wine
2019年12月12日に英国でレビュー済み
Amazonで購入
Is blood thicker and stronger than wine? An important question, indirectly asked, in this fine French drama. I plan to narrate some of it now, so if you prefer not to know some details, perhaps stop reading or just skim.

Jean loves and misses Ben, his five-year-old son in Australia. Ben is with Alicia, his mother and Jean’s wife, a wife from whom he is estranged. Both Jean and Alicia were rolling stones or wandering stars. They met on the road six or seven years ago. Their road was Brazil, Argentina, Chile, and then Alicia’s homeland of Australia where Ben was born.

Jean isn’t in Australia any longer. He’s back in Burgundy, in rural France, the place where he grew up among the vineyards of a domaine owned and run by his parents. Jean was schooled in the fields, his subjects sunshine, rain, grapes, insects, fungus and moulds. He was a man or boy of the soil, both blood and wine seemingly running through him. But he was also a dreamer, a romantic, a person who heard the call of the wild, or in this case the call of the wild road. Alicia was the same, the power of wanderlust in Australia strong, especially among the young. So this story is a modern bildungsroman, to use the German expression, a tale of characters who take to the road to find inspiration and discover identity.

But in this film we don’t see the road. We only see what it has done to Jean. He’s home again but a stranger, a man with baggage no one can unpack for him. A big part of his burden is Alicia and what their love has produced — Ben, the child who wasn’t planned. Jean loves him but it complicates things. Jean was with Alicia when Ben was born. So, Australia it is? France, after all, is ancient history by now. Yet blood, like wine, is strong, as stated.

Jean left France under strained circumstances. As a boy he gazed out lovingly at the domestic vineyards from his bedroom window in the family farmhouse. But that was then, a long time ago when it was the only life and world he knew. As time passed he felt more and more isolated, left out, passed over. Life was elsewhere, the big world far bigger than Burgundy. Everyone knew it of course but few felt it as strongly as Jean did. To them — his parents, younger sister Juliette and younger brother Jeremie — home was just a fact, something steady and stable. But to Jean it had become static and stale, something knowable, predictable, limited, dull. At 19 or 20 he longed for something else. He wanted to see the world.

His father never understood this, or if he did he did his best to try not to. Jean was the oldest child and son, the strongest and ablest. Father depended on him. Jean would inherit the estate when his time came. He would become master of the vineyards. Jean had known this for a long time and in the past it probably made him feel proud. But now it makes him shudder. The thought of it binds him, chains him to a patch of earth he had no say in wanting to belong to.

But that’s the thing about fate, or whatever it is that causes us to be born. We’re never asked. We haven’t a choice. It’s all just handed to us — the time, place, parents, siblings, language, culture, country, etc. The things that make you who you are. The things that are inescapable.

Now Jean understands. If he was schooled in the fields he’s also been schooled by the road. He thought he was escaping everything (his father, drudgery, provinciality, the past) but Australia turned him into a boomerang, hurling him back home.

Thus the prodigal son returns. He’s dishevelled, bearded, tattooed, his clothes rather dirty, tattered. The road has marked and shaped him. Yet he’s still recognizable as a brother to his siblings, if not a son to his parents. This is because his mother is no longer living. She died while he was away. He heard about it by phone from the family but couldn’t return in time for the funeral. Why not? He could have hopped on the earliest flight. Not possible because Ben was born on the very day Mother died. Alicia needed Jean, so he stayed among the living and the newly born instead of retuning home to the dead.

This looked selfish to some, to those in Burgundy. Jean couldn’t or wouldn’t explain his personal circumstances, as they knew virtually nothing of him since he left. Nothing important, that is, his life after France reduced to tourist postcards for them.

Why is he back now? It’s hard even for him to know and say. The main cause is his father’s health. He’s in hospital, weak and dying. He suffered a stroke and can no longer speak. Irony there, Jean thinks, because all Jean can ever remember growing up was being talked to or at by his father, being told what to do, including to listen and obey, never asked what he thought or felt. But even now Jean doesn’t know what to say, thinking his father won’t understand anything he might say.

Where does the alchemy, the magic in the film come from? It comes from home, the soil, the vineyards, sunlight and taste of wine. It comes from memories of his loving mother, always protective, and of his siblings whom he still loves. Jeremie is defensive and hurt at first. He feels abandoned and betrayed by his older brother. He considers Jean selfish. Their father is dying and their mother dead. Where was Jean when the family needed him? Everyone had to carry on without him. Things are better with Juliette, his sister. They were always close growing up, and they still kiss and hug now. But Jean cannot kiss and hug Jeremie as he does Juliette.

The film tells me many things, but maybe the most important is this:

You can’t lead a divided, double life. You need to be whole. You can’t be in Australia and France at the same time and if you try it will tear you apart. You can’t have two families, or you can but only when the families are combined as one. This will also be what Jean comes to understand. He couldn’t escape the past. But in finding a different future elsewhere it allowed him to come back to that past.

How can it end? With greater understanding, acceptance and love, that’s how.

In French with clear and excellent English subtitles, though the English-speaking moments between Jean and Alicia and Ben are not subtitled for those with troubled hearing.

andy
5つ星のうち3.0 Dissapointing
2019年2月2日に英国でレビュー済み
Amazonで購入
“Back to Burgundy” (original title “Ce Qui Nous Lie”) has an excellent cast that includes: Pio Marmaï, Ana Girardot and François Civil who play three siblings, and there is another “character” in the form of the industrious landscape of the Beaune region of France where the story unfolds.

Music in the film is good and especially so, music on the soundtrack from Camélia Jordana. The film looks good, its people and the land all look good. Acting, cinematography all good and much more besides, all good, but I didn't enjoy “Back to Burgundy” as much as other films that I have watched by the director. Partly due to the way that the narrative delivered the story that let it down for me and it felt like there could have been more substance to it.

On the DVD version of the film, there is a menu at the beginning that gives a two options. One says “France” and the other says “United Kingdom”. There are extra features available on the DVD but they are only found through the “French” option on that initial menu.

Available on the “France” option menu on this DVD:

Extra Features (there are no subtitles on the extra features).
French subtitles and Audio Description.
続きを読む
3人のお客様がこれが役に立ったと考えています
違反を報告
レビュー を日本語に翻訳する

R. Chapman
5つ星のうち3.0 Winegrowing in Burgundy.
2019年7月20日に英国でレビュー済み
Amazonで購入
I've enjoyed many of Klapitch's previous films but I found this latest offering curiously unmoving and unengaging.
I was attracted to the subject and locale and the images of the changing seasons are beautiful but the story lacks impact and remains banal. Slow narratives aren't a problem for me but it ultimately lacked any substance.
I was reminded of a superb Emani Olmi film from several years ago, 'The Tree of Wooden Clogs' that dealt with changing rural seasons in an Italian setting which had much more impact and resolution.
続きを読む
2人のお客様がこれが役に立ったと考えています
違反を報告
レビュー を日本語に翻訳する