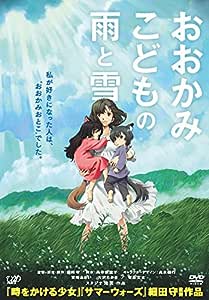 Kamran Rahman
5つ星のうち5.0 A simple and beautiful film
2014年12月6日に英国でレビュー済み
Amazonで購入
Outside Japan it can sometimes feel like we're over-exposed to Studio Ghibli, and it's easy to think that that's where Family Anime starts and ends. But of course, there are other Anime studios, and this film is from Studio Chizu, one of the studios which, based on this and other recent offerings, may well take the crown, just as Pixar shoved aside Disney in Hollywood.

This is a beautifully made film, with a very simple story about a woman who brings up two children who can change at will between human and wolf, having been fathered by a man who could do likewise. The woman, Hana, is entirely human, so when the Wolf Father dies, she struggles to raise these two half wild children in her Tokyo apartment. She therefore takes them to the countryside, where her struggles continue, but are more manageable. The second half of the film then focuses on the children themselves as they mature into adolescence and undertake their own struggles - for them its the struggle to find their places as wolf/human hybrids, and discover themselves. So the second half is very much "coming of age" or "rites of passage".

The main character is Yuki, the girl wolf, the narrator. She's a terribly cute little girl, and just as cute as a wolf cub. Her little brother Ame is just as cute, but features very slightly less in the story. The mother Hana is a perfect and devoted mother. The whole family set-up is very sweet and endearing, but not overly-sentimental because the characters are very three dimensional and very engaging. The struggles that the three of them go through are nothing like the struggles that we ourselves might face, and are each very different, but I was drawn into those struggles completely.

This is definitely a lovely family film to watch with kids, from age 5 and above, but adults can enjoy it on their own too. With Studio Gibli and Hayao Miyazaki we became accustomed to some quite serious themes in films such as Princess Mononoke, Spirited Away and The Wind Rises. This film is not like that at all. It focuses on telling a simple story with engaging characters. It is proper family entertainment.

The animations is a little mixed. Most of the nature animation is breath-takingly beautiful, but the animation of the human and animal characters is just plain, simple anime.
続きを読む
29人のお客様がこれが役に立ったと考えています
違反を報告
レビュー を日本語に翻訳する

Ms. J. Mann
5つ星のうち5.0 Give this at least 8 Stars !!
2016年4月28日に英国でレビュー済み
Amazonで購入
Pity can only rate this as 5 stars as I'd give it at last 8. An excellent movie, the english voice actors were brilliant and the animation beautiful to watch.The storyline as already listed by others before here, told from the view of the daughter looking back relating the struggle of her family from her mother meeting her father who turns out to be a shape shifting wolf ! to their children part human, part wolf staying together as they grew up with their secret, will the call of the wild be stronger than their human side? heartwarming, tragic and funny. Was warned may need a tissue handy and yes darn those onions.
続きを読む
4人のお客様がこれが役に立ったと考えています
違反を報告
レビュー を日本語に翻訳する

Bud96
5つ星のうち5.0 An Adorable film!
2019年1月9日に英国でレビュー済み
Amazonで購入
This film is lovely!! It is a very sweet film that charts the life of Hana and her children from babies until young children, following them as they learn whether they want to remain a human, or be a wolf. This was recommended to me by someone who loves the Studio Ghibli animated films so I thought I'd have a look into it. I was hooked from the opening scene all the way until the end credits rolled! But be warned, you will need a packet of tissues nearby!!
続きを読む
違反を報告
レビュー を日本語に翻訳する

Amazon Customer
5つ星のうち5.0 A film about fitting in to society
2020年9月11日に英国でレビュー済み
Amazonで購入
I have bought this as gifts for friends who are also parents. It's a film that has really important themes about fitting in. The comparison between the wild creatures that we are, and for many of us, the need to connect with nature and the wild. Then those who can hide and suppress that side to fit in with school and society; and those - like the wolf in the zoo scene that have deteriorated through institutionalisation and disconnection. Are the gates and locks around our children's playgrounds, the ADHD diagnoses a helpful way to be safe or to describe humans?
続きを読む
違反を報告
レビュー を日本語に翻訳する

Vixey
5つ星のうち5.0 Another Masterpiece
2014年5月5日に英国でレビュー済み
Amazonで購入
I'm a huge anime/manga fan and this is another wonderful movie. It's a decent length (which sometimes you don't get from this genre) and mixes all kinds of emotions with the beauty of nature. You won't be disappointed of you're a fan of the genre and it's a brilliant animated movie in its own right. It's brilliantly dubbed but also can be watched in it's original format. The story is about a woman who loses her husband and is left to look after her two children, who are a type of werewolf, in a way. She moves them to the countryside where they both chose their paths and grow up surrounded by nature. It's lovely!
続きを読む
8人のお客様がこれが役に立ったと考えています
違反を報告
レビュー を日本語に翻訳する
すべてのレビューを参照します
Amazonプライム会員ならお急ぎ便、日時指定便が使い放題
さらに、映画もTV番組も見放題。200万曲が聴き放題 。クラウドに好きなだけ写真も保存可能。
> プライムを無料で試す