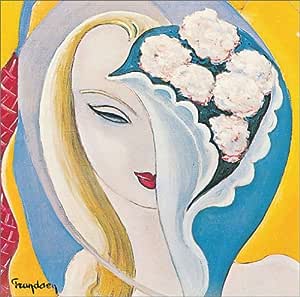 Japanese Special Edition of this Classic Original Album Re-released on CD and Packaged in a 12 X 12 Inch Album Sized LP Replica Sleeve with all the Original Artwork and Tracks.

Who Was Layla ? ( Better Ask Patti Boyd ( Formally ) Harrison )
You See, George Played On The Track " Saluting " The Later Mrs Patti Boyd Clapton.
Oh Well, Geotge Was A Mellow Fellow, And Wouldn't Let A Little Thing Like That Embitter Him.

The Late Duane Allman Is Show-Cased Here With His Brilliance ( After Leaving Hourglass, And Before Later Fame )

Bobby Whitlock Is Here With His " Thorn Tree In The Garden "

" Nobody Knows You, When You're Down And Out "

Crowshott
5つ星のうち5.0 Clapton shows his blues skills
2019年10月24日に英国でレビュー済み
Amazonで購入
Eric Clapton on guitar, Bobby Whitlock on Keyboards, Jim Gordon drums and Carl Radle on bass. Occasional members Duane Allman guitar and Dave Mason Guitar. Make up this band. Eric writing key tracks with other group members. The classic Layla is here in all its glory. Bell Bottom Blues is my favourite and the Hendrix cover Little Wing. Clapton and Hendrix became friends with Hendrix unfortunately died shortly after this album was released. Clapton show his fabulous blues influence during this album. He then went on to his solo career. A must for all Clapton fans
続きを読む
1人のお客様がこれが役に立ったと考えています
役に立った
フィードバックを送信中...
フィードバックをお寄せいただきありがとうございます。
申し訳ありませんが、お客様の投票の記録に失敗しました。もう一度試してください。
違反を報告
レビュー を日本語に翻訳する

tpbdurisdeer
5つ星のうち5.0 Comprehensive collection of the music of one of the 70's best bands.
2014年7月16日に英国でレビュー済み
Amazonで購入
It took me a while to getting round to buying this but it was definitely worth the wait. The whole thing is well produced. The box is kept closed by a magnetic catch and when you lift the lid you get a 3D pop up of the original album cover. Inside are three facsimile concert tickets, a Derek is Eric badge, a quality print of the cover art, a stick on scratch plate cover for a Fender Stratocaster, a hard back book and of course the music - 4CD's, a DVD and double LP.
I had no problem with the packaging - everything arrived in pristine condition. The Amazon seller who sent it made sure it was extremely well protected with generous amounts of bubble wrap and very secure packaging.
The music is sublime as other reviewers have more than adequately described. It's great to hear the Phil Spector produced single and the various live takes plus the unreleased music from the second album sessions. The inclusion of the Live At Fillmore CD just about wraps up everything this brilliant band produced in their short existence.
The book gives a comprehensive history of the band plus essays on the recording sessions at Criteria Studios in Miami and Olympic in London. There's also an interview with guitarist Derek Trucks about growing with Clapton and the Allman Brother's music and getting to play in a band with the man himself.
All in all a box set to treasure.
続きを読む
8人のお客様がこれが役に立ったと考えています
役に立った
フィードバックを送信中...
フィードバックをお寄せいただきありがとうございます。
申し訳ありませんが、お客様の投票の記録に失敗しました。もう一度試してください。
違反を報告
レビュー を日本語に翻訳する

Mj Elton
5つ星のうち5.0 Wonderful
2020年3月17日に英国でレビュー済み
Amazonで購入
Simply, one of the great albums of the decade('70's) or any other. Clapton at his finest and the contribution of Bobby Whitlock in particular to the songwriting ,outstanding. It's fun to hear Eric's guitar offset by Duane Allman's slide work and Bobby Whitlock's piano is similarly excellent. Cannot recommend this highly enough.
続きを読む
1人のお客様がこれが役に立ったと考えています
役に立った
フィードバックを送信中...
フィードバックをお寄せいただきありがとうございます。
申し訳ありませんが、お客様の投票の記録に失敗しました。もう一度試してください。
違反を報告
レビュー を日本語に翻訳する

KaleHawkwood
5つ星のうち5.0 Eric, Duane & the guys
2013年6月1日に英国でレビュー済み
Amazonで購入
Hearing this again, after too long away from its many delights, I realise I`ve seldom heard such joyous blues-rock music. These five guys display such a feeling of multi-layered, interweaving blissed-out music-making on these tracks that you can`t help thinking there must have been something in the water back in 1970 in that Miami studio, or that Tom Dowd is a producer who just wanted to create a warm glow of sound in which their instruments - in particular the twin guitars of the Englishman and the American - could wail and whisper, shiver and shine, duck and dive and drown in bucketloads of exultant sonic electric gorgeousness!
Much of the time it`s not easy (or necessary) to tell which axeman is playing lead as they both had a `sweet` way of playing - the past tense sadly suitable for the late lamented Duane Allman - and both play heart-tearingly, nailbitingly exciting solos on the straight blues workouts, Have You Ever Loved a Woman, and especially the phenomenal ten-minute Key to the Highway, on which they seem to be each upping the ante, urging each other on to ever greater flights of vertiginous guitar audacity. You can sense their blood racing in their veins - along, no doubt with certain other substances...
I Looked Away is a terrific mid-tempo opener to this perfectly programmed set of songs (which - how could they have known? - fit neatly onto one disc) and is followed by one of my favourite tracks, the yearning Clapton-composed Bell Bottom Blues, a stunner of a song which Eric sings like a dream (to my mind, EC has always been an underrated singer).
Nobody Knows You...is a lovely, unaffected reading of the old blues standard, while
I Am Yours is a gentle love song co-written by EC.
Anyday is glorious! Written by Clapton & keyboardist and sturdy-voiced co-singer Bobby Whitlock, it`s one of the most representative songs on this iconic album, a fast-paced yet warm and joyful rocker.
Tell the Truth is just great, and Hendrix`s Little Wing a fine tribute to the recently dead legend.
It`s Too Late is an unexpected delight. I`ve got a version (the original?) by none other than Roy Orbison, but it suits the Dominoes down to the ground. They rock it up a bit, unsurprisingly.
Layla is - well, it`s Layla...
My mate Pete doesn`t much like Whitlock`s Thorn Tree in the Garden, but I think it`s a nicely gentle way to close an otherwise fairly frenetic record.
This is one of the greatest albums of its era, or any era. It sounds as timeless now as when I first heard it as a callow nineteen-year-old, and it still excites the hell out of me.

Miss S. P. Wells
5つ星のうち5.0 Worth it
2013年6月7日に英国でレビュー済み
Amazonで購入
Still listening and getting to know the album as there is
so much in it.
I heard this when it was first released in 1970
and could not afford it, being only 14. I used to go and ask the record dept
in Grants in Croydon to play it for me and I would sit in the
booth for as long as possible without getting chucked out!
The LP vanished without trace and then one day in 1973 I was walking
down a beach in Wales and heard the strains of Layla coming out
of a transistor radio and couldn't believe my ears - radio 1
were playing Layla as a single. The rest is history.
Clapton's finest era was with the Dominoes.
続きを読む
5人のお客様がこれが役に立ったと考えています
役に立った
フィードバックを送信中...
フィードバックをお寄せいただきありがとうございます。
申し訳ありませんが、お客様の投票の記録に失敗しました。もう一度試してください。
違反を報告
レビュー を日本語に翻訳する

Yogi
5つ星のうち5.0 Cracking Album
2014年7月28日に英国でレビュー済み
Amazonで購入
I had heard a couple of the popular tracks on here, had a couple of Clapton CDs, but can't believe it took me so long to find this album.

They were a bit before my time - also picked up the Cream - I Feel Free Ultimate Collection at the same time - that is a cracking collection too.
続きを読む
2人のお客様がこれが役に立ったと考えています
役に立った
フィードバックを送信中...
フィードバックをお寄せいただきありがとうございます。
申し訳ありませんが、お客様の投票の記録に失敗しました。もう一度試してください。
違反を報告
レビュー を日本語に翻訳する

Mick O'Donnell
5つ星のうち5.0 Blues/Slide Guitarists Ultimate album
2014年2月9日に英国でレビュー済み
Amazonで購入
Anything that could be said about this album has already been written, analysed and digested by any fans of Eric Clapton, Duane Allman, and the musicians who underpin it and bring it all together - Carl Radle, Bobby Whitlock and Jim Gordon, Ostensibly this is Clapton's album but I agree with everything that has been written prior, and that it that it is Duane Allman's beautiful lead, rhythm and in particular his slide guitar virtuoso playing that helps elevate this album to the heights to which it is broadly regarded. In my very humble view, a dissection of the tracks that feature on the album is pointless, as every song has its strengths and in that regard, every song on the album is worth tuning into to hear what it is that the band, as a cooperative, is trying to bring to the listener.A long time favorite album of mine and one that should have a place in the collection of any serious music enthusiast.
続きを読む
5人のお客様がこれが役に立ったと考えています
役に立った
フィードバックを送信中...
フィードバックをお寄せいただきありがとうございます。
申し訳ありませんが、お客様の投票の記録に失敗しました。もう一度試してください。
違反を報告
レビュー を日本語に翻訳する
その他の国際レビューを読み込む