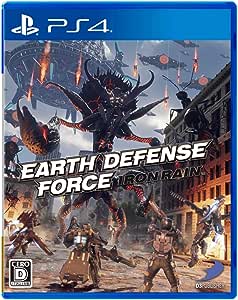 I had high hopes for this title; Yuke's is still the developer here, which bode well. Then, I read somewhere that the game would be "aimed at a western audience," and my stomach hit bottom. We now know exactly what the means, and it isn't flattering. Unfortunately, it's a 100% accurate description of how good games go wrong, and Iron Rain is exhibit A.

EDF 4.1: Shadow Of New Despair was a tough act to follow for the series---it arguably encapsulates what is the entire essence of EDF. The understated (and unintentional) humor, the ridiculously large-scale battles, the rah-rah pluckiness of the Earth Defense Force as it fought a foe that was impossibly huge and endlessly entertaining. It was a uniquely Japanese effort that pulled everyone in due to its fun design and accessibility.

Welp, scrub all that. Literally. Iron Rain bears only a superficial connection to the series, and somehow manages to alienate itself from almost every concept EDF has established thus far. If you've ever wondered what an EDF game would look like if it had all the fun sucked out of it, now's your chance.

Two words can be used to describe IR: slow and dull. Slow because everything seems to be a half-step behind, and dull because there is nothing interesting to look at, hear, or do. The game shows its poor hand very early on, when on only the third level the frame rate dips dangerously into the single digits, and only when a handful of giant robots and alien ants are on screen. None of this is helped by the fact that your character, regardless of class, runs excruciatingly slowly compared to the soldiers of previous titles. Your rifle's firing rate is likewise sluggish, and flying around as a Wing Diver class is akin to heaving a sack of rocks around. Gone is the lithe freedom of the Wing Diver from 4.1; gone is their swooping tactics and odd but powerful weaponry. Nope, in this game you either get to run around slowly and fire a crappy rifle, or fly around slowly and fire a crappy rifle.

This is all by design, however. Your character is sluggish because he/she has on an exoskeleton that is powered by energy crystals. Activating its overdrive makes you move swiftly and fire twice as fast, but its very presence begs the question of why the developers decided to cripple the hero's movement to make the game dependent on a gimmick that wasn't needed to begin with. It's a system that left me scratching my head. It's neither rewarding nor fun, and it pretty much eliminates the special feeling that come from the previous titles, when some forethought was needed when tackling a level.

Gone, too, is the fun in discovering new weapons. Now they must be purchased with several different kinds of intermingling currency, both "credits" and several kinda of gems. How these are obtained are never fully explained, until you see the tally screen at the end of the level. Health extensions, weapons, and armor must be purchased and not earned, making the game a mercenary exercise that again stamps out the joy of discovery found in previous titles.

If none of this were bad enough, the game's presentation is a rollout of generic mediocrity. The hilarious self-awareness of EDF has always been in the nihilistic self-deprecating humor the EDF troopers had; they knew they were expendable pawns in a ridiculously outmatched war, and it was a refreshing break from the grimdark antiheroes of other series. That too is gone, and in its place is found disgustingly generic designs and flavorless stereotypes that neither endear nor spark interest. The bright colors and distinctive look of EDF is gone, replaced by washed out green and gray soldiers that fight washed out green and gray enemies in a washed out green and gray landscape. Their chatter is ceaseless and boring, and you can't even off them via friendly fire to make them shut up. The sound design is likewise forgettable, with tinny, faint gunfire and almost nonexistent enemy noises.