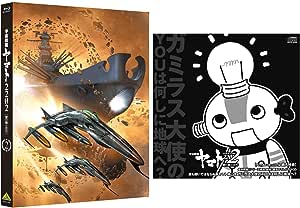 Destro
5つ星のうち1.0 Bitterly disappointed no English Subtitles in what looks like a stunning continuation of the saga.
2018年1月7日にアメリカ合衆国でレビュー済み
Amazonで購入
Beware - NO ENGLISH SUBTITLES. Why did season one and the minimovie between Season One and Two have English subtitles and these don't? Unlike most Animi the original Battleship Yamato (titled Starblazers in the US) was broadcast in the states back in the 80s when most of us had only three channels. I really loved the new series and purchased this one looking forward to the battle with the Comet Empire. I thought something was wrong with my bluray player until I read elsewhere that NONE of the Comet Empire discs were being released with English subtitles. Why? Mindboggling that other shows get even English dubbed tracks and a series that goes back decades does not even have English subtitles. This would be a five star rating if I could at least read the dialogue because the visuals look stunning. Not paying $100.00 for even the stunning visuals with no idea of what is being said by the characters on screen.
続きを読む
25人のお客様がこれが役に立ったと考えています
違反を報告
レビュー を日本語に翻訳する
すべてのレビューを参照します
Amazonプライム会員ならお急ぎ便、日時指定便が使い放題
さらに、映画もTV番組も見放題。200万曲が聴き放題 。クラウドに好きなだけ写真も保存可能。
> プライムを無料で試す