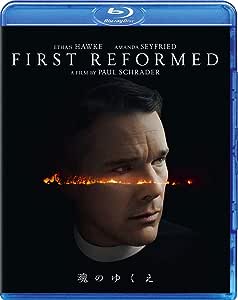 Car 99 Where are You..
5つ星のうち5.0 First Be Good....Then.
2019年3月5日にカナダでレビュー済み
Amazonで購入
Reverend Ernst Toller Words: I have decided to keep a journal. not in a word program or digital file,
but in longhand, writing every word out so that every inflection of penmanship, every word chosen,
scratched out, revised, is recorded. to set down all my thoughts and the simple events of my day factually-
and without hiding anything, when writhing about oneself, one should show no mercy.
I will keep this diary for one year; 12 months. And at the end of that time, it will be destroyed. shredded,
then burnt....end his quote”
There is one thing i know, is that people has an will continue to have doubts about the world in general.
an if we will survive some cataclysmic explosion of our planet.
just like this one person in this movie, First Reformed” which the end I wont say.
let’s face it this movie is either Na or far. you’ll have to chose?
I find it abundantly clear to be the master of your own domain, we can’t live everyone's life. clear enough for me.
First Be Good....Then.
1.37:1
Runtime 113 Min.
English 5.1 DTS-HD.

JR
5つ星のうち4.0 Wow! One of the best movies of 2018 for me
2018年10月24日にカナダでレビュー済み
Amazonで購入
I usually shy away from Ethan Hawke but his performance in FR was outstanding. The lines & textures of his face conveyed the internal sufferings and conflicts.

FR is clearly in the same film realm as Silence and Doubt. Those 3 films, to me, would form a holy trinity; appreciated by both religious and non-religious.

"How did she get in?" is the question asked and spoken by the director on the commentary track. It only served to bring me more confusion to understand the film. The scene either kills the movie or be totally awed by the twist. Your choice if you want to take a crack at it.

Minor issue with the product being this is the American version, so the digital code is not valid in Canada.

C. C. Black
5つ星のうち4.0 A Serious Film about Serious Matters
2018年9月3日にアメリカ合衆国でレビュー済み
Amazonで購入
A character study that draws deeply from writer/director Paul Schrader's personal experience, "First Reformed" is an updated, Americanized blending of Bresson's "Diary of a Country Priest" and Bergman's "Winter Light." All the performances, from large to small, are believably first-rate. The audio commentary by Schrader will interest those who want to know how the director made his casting and especially camera selections. For me, the movie lacks those moments by which I know I've seen a great film, but it's a very good one that I suspect will wear well in years to come. Caution about the Blu-Ray edition, which I purchased first and returned almost immediately after receipt: the chapters had somehow become scrambled in playback. I exchanged the Blu-Ray for a regular DVD, which performs without a hitch. Since the film was deliberately shot with a muted palette, you lose a crispness of image with the DVD, but little more.
続きを読む
55人のお客様がこれが役に立ったと考えています
役に立った
フィードバックを送信中...
フィードバックをお寄せいただきありがとうございます。
申し訳ありませんが、お客様の投票の記録に失敗しました。もう一度試してください。
違反を報告
レビュー を日本語に翻訳する

Roy Hobbs
5つ星のうち5.0 Best Film of 2018
2018年8月30日にアメリカ合衆国でレビュー済み
Amazonで購入
Paul Schrader's best work in years, and possibly of his entire career (along with "Mishima"). This is a must see for serious film lovers. Ethan Hawke and the supporting cast all are great and the script/camerawork/music are superb.
続きを読む
46人のお客様がこれが役に立ったと考えています
役に立った
フィードバックを送信中...
フィードバックをお寄せいただきありがとうございます。
申し訳ありませんが、お客様の投票の記録に失敗しました。もう一度試してください。
違反を報告
レビュー を日本語に翻訳する

Allen Garfield's #1 fan.
5つ星のうち5.0 Paul Schrader's spiritual apocalypse.
2020年4月15日にアメリカ合衆国でレビュー済み
Amazonで購入
never expected to be so moved by "First Reformed", a small indie that tackles large themes such as climate change, mental health, and faith rather ferociously. Though it is a bit of a slow-burn at the start, it's impossible not to be drawn in by Ethan Hawke's magnetizing performance. He is masterful as Ernst Toller, a pastor who begins to unravel after an encounter a husband and wife who are environmental activists. The second half of the film is particularly strong, as Toller's polite and unassuming facade begins to crack, and writer/director Paul Schrader makes some daring filmmaking choices that add to the unpredictability of the film as it heads toward the climax. Though the ending has been controversial among audiences, I thought it was an incredibly bold, beautifully executed choice, and the final few minutes of the film have been seared into my mind. Regardless of how you respond to the ending, there is no doubt that this is a thought-provoking and important piece of art. A must-see.

Lionsgate has done a capable job on this transfer that came from the original digital recording of the film. The film is presented in a 1.34:1 aspect ratio which means that there will be bars on both sides of the picture. While I am not a big fan of this aspect ratio, preferring wider lensed films, I don’t mind a little variety. In this case, I feel like it was Schrader’s attempt to make the film feel more intimate and humbler by limiting the vastness of the image. The effect is that the film does feel focused. The film looks pretty grey and does not utilize much color, but I personally thought it was beautifully shot overall by cinematographer Alexander Dynan. It’s a visually striking film even if some people would not consider it to be beautiful. Like other Lionsgate transfers, it is not going to let down any fans.

Audio:
The DTS-HD MA 5.1 track to the film is mainly an exercise in reserve. The film is more about discussions and silence than any grand mindblowing sound experience. That said, the ambient score by Brian Williams is sneakily effective – minimally used and works like a charm. The track is true to the original intent and sounds good.

Audio Commentary – Featuring Writer/Director Paul Schrader, who always delivers good tracks, this is an illuminating track chock full of information about the film. He comments on working with Hawke, the overall theme and his candid thoughts on the film’s ending.

Discernment: Contemplating First Reformed – This short piece features interviews with Schrader, Hawke, and Cedric the Entertainer. It was interesting to know that both Hawks and Schrader had considered the priesthood. Worth your time.