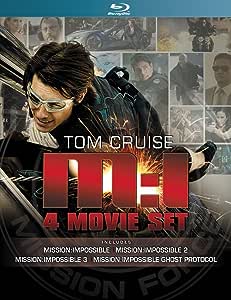 charles rabone
5つ星のうち3.0 Blu-ray acceptable
2018年5月25日に英国でレビュー済み
Amazonで購入
The films gets the heart pumping as most of Toms films of this genre do. This is a review of the blu ray tranfer. Like most modern films on DVDs you find that the print is limited to just a upgrade and no real restoration unless it’s a classic, hence I think is the reason most of these Blu-ray Discs are as cheap as they are, including this one. So if you haven’t got this collection , then you are getting great value for money. For those like myself that wants to upgrade his DVDS collection to HD, with a 4K player and 4K TV, it’s an acceptable upgrade, but it won’t get your heart pumping in the same way as Ben Hur did for me or some other great classics that have had restoration work done on them . That’s said not all classics that have had Restoration work, have a greater improvement from a DVD restoration film ,Re Godfather...and grain is apparent in this film, so the source isn’t that clean. But heads above some older films that you see that have had no restoration and the tranfer source to blu Ray is not clean, re; Matrix. Most of us have all these past films and I like a lot of you out there are enjoying them again, through better Technology, Sharpness of picture and Sound, which are better now I’m sure than when you watched them for the first time.
Point making it’s worth the upgrade on most films to HD, take that from someone who has now viewed over 500 upgrades . Nice hobby. Beats stamp collecting for me anyway.
Hope this helps a few of you out there.

Nish
5つ星のうち3.0 A good blu ray conversion is mission impossible
2018年7月27日に英国でレビュー済み
Amazonで購入
All 4 movies are absolutely fantastic, but it's the Blu-ray conversion that lets them down. Absolutely no effort seems to have been put in by Paramount to transfer the movies to Blu-ray. MI:1 has a grainy conversion which looks good in parts, but is almost blurry in places. MI:2 is a marked improvement but has many scenese where there's also a soft blur, especially on long distance shots. MI:3 is the first one out of the bunch to actually impress, and MI:4 must have had an official Blu-ray release from the beginning as it is the best looking and sounding of the bunch.

As far as the movies go:
MI:1 - Remains an absolute classic Brian De Palma thriller. It has a good plot and is well placed. The Langley break in is still every bit as good as I remembered.
MI:2 - I loved this when it was released, but I was a naive teenager back then! It has not aged well and is easily the worst MI movie of the bunch. John Woo delivers with some great (albeit cheesy) action sequences making it very watchable. But it's a bit too tongue in cheek for my liking.
MI:3 - I was a massive fan of this too when it was released but it clearly suffers from classic JJ Abrams storytelling where there's a lot of blanks and mysteries that you have to fill in as a viewer. However, Seymour Hoffman has an excellent turn as the villain and should have been utilised more. The bridge sequence in this movie is quite possibly one of my favourite action sequences ever.
MI:4 - this has some fantastic locations and a pretty decent plot. The action sequences just get better and more innovative. Lowest point of this movie was Brij Nath...why, oh why!

The recent conversion of the MI series to 4K will hopefully yield a new box set containing properly remastered Blu-rays once MI:6 is released. My advice is to hold out until then.

JONATHAN STUART-BROWN
5つ星のうち5.0 Worth it for the fourth film alone
2019年5月18日に英国でレビュー済み
Amazonで購入
It took Mission Impossible a few films to find its formula. The fourth movie is by far the best. The third is very good. The first two have their moments and great actors. Cruise was younger at the start but the stories, scripts, action, humour, heart, entertainment got better in this franchise. The fifth and sixth brilliant instalments are not included. But one to four are. Worth it for four alone. Great cast. Great story. Great entertainment.
続きを読む
違反を報告
レビュー を日本語に翻訳する

Pickles
5つ星のうち3.0 A mixed bag
2019年3月25日に英国でレビュー済み
Amazonで購入
The are some truly nasty HD transfers here, mainly the first and second films. The quality picks up noticeably from MI III onwards. The original movie continues to be a decent film that's spoilt by, what are by today's standards, some terrible visual effects, and it has dated somewhat. MI II is just a pretty poor film, made by a director who didn't understand what he was supposed to be making, and it's marred by a terrible transfer. When JJ Abrams takes over from III onwards, the films are much more enjoyable, if a little the same.
続きを読む
違反を報告
レビュー を日本語に翻訳する
すべてのレビューを参照します
Amazonプライム会員ならお急ぎ便、日時指定便が使い放題
さらに、映画もTV番組も見放題。200万曲が聴き放題 。クラウドに好きなだけ写真も保存可能。
> プライムを無料で試す