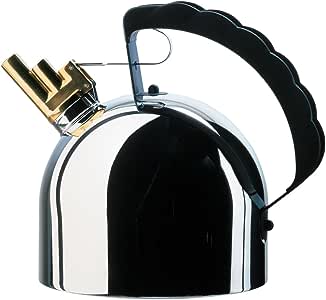 Ted Sales
5つ星のうち1.0 The epitome of "form over function"
2015年3月20日に英国でレビュー済み
Amazonで購入
You would expect for such an expensive product that this kettle would boil water very well, work reliably for a good few years, and be functionally and visually considered - i.e. well designed.

It certainly lives up to the "visually considered" requirement; designed by Richard Sapper to clearly make a statement, its form is pleasing to the eye, it feels solidly made out of quality materials, and it looks great atop our glass induction hob. When we first started using it, the two-tone whistle was a good novelty and it made the kettle boiling sound cheerful and melodic - no high-pitched, ear-piercing din to be heard. Additionally, the kettle is fast - on the highest induction power setting it boils slightly quicker than our standard electric kettle (3kW, so already pretty fast).

However, this kettle has a serious case of "form over function" when you consider its design. I don't think anyone from Alessi has ever consciously tried to use the thing. Practically it's a bit clumsy - filling it up with water is more difficult than it should be given the strong spring-action spout's obstructive nature. They've focused so much on the design being clean and simple that it is arguably oversimplified, given the lack of a water gauge or method of determining how full the kettle is - other than looking inside the spout, which is hardly accurate. Perhaps worst of all, when the kettle boils - even with a very modest amount of water in it - the pressure inside is such that whilst it forces steam through the pitch pipes in the spout to make the signature noise, droplets of water also make their way into the pipes and as a result quite a large amount of water pees out of the top, spilling in front of the kettle. Maybe less of a concern with induction hobs but really quite annoying or even dangerous if you were using a gas hob - it only takes the flame to extinguish whilst you're away from it and you've got a minor gas leak. OK, so that's unlikely - but one thing I don't agree with is that the instruction manual specifically lists this as something that "just happens" and says it's not a problem with the kettle. It just smacks of bad design - rather than bother to fix the problem, Alessi have just said "oh no, it's supposed to do that". Not good enough - shameful even, in my book.

Going back to those 3 basic requirements, the aforementioned problems only really break the "functionally considered" part - so if that was the end of the story I could forgive those issues, resting on the other positives as good justification for the price.

But those were just the beginning of the problems. After using the kettle for little over two weeks, one of the two pitch pipes decided to stop working completely, meaning the kettle would only make a single note when boiling. I appreciate that these pipes are delicate but we always boil the kettle with water from a filter tap - this drastically reduces the "hardness" of the tap water in our area. Given that, I think a pitch pipe lasting a grand total of 2 weeks is disappointing at best - they can be bought as spare parts from Alessi but they aren't cheap, and if I'm replacing a pipe every two weeks that's 25 pipes a year - costing roughly £100!

Alessi supply a couple of replacement pitch pipes with every kettle, so I tried to replace the broken one with the thought that I was probably just unlucky. However the instructions are woefully vague on how you do this - they essentially just say to shove a flathead screwdriver of unknown size down the pipe starting from the inward-facing side to push it out of the spout. I tried to do this carefully so as to not damage the kettle, but as hard as I tried it would not budge in the slightest with any screwdriver. Looking closely, the pipes are just not designed to come out - there's no location on them where you can butt the screwdriver up to, so no way of exerting any serious force on them. It's also very hard to tell which pipe you have to replace as neither are well-marked - I had to resort to puffing down the end of the spout from the inside (not easy!) to make them emit noise as identification. The last straw was the instructions saying that when putting a new pipe in, you push it into place with a pencil - I grabbed a normal sized pencil and it didn't even fit in the hole! Just madness on so many levels.

They also have the audacity to say that there is no warranty or guarantee whatsoever on the pitch pipes, as the conditions they are used in are not controllable with varying water hardness. Personally I think that's unforgivable - if you design a product in a certain way and it malfunctions within two weeks, there's a grave problem with the design. That's not a licence to just cover your arse and say "we don't guarantee the bits that often break" - doing so renders the whole idea of warranty completely pointless.

All of these calamitous failures basically reduce the list of the kettle's positives to "boils water quickly" and "looks nice". I've got something else that does those two things - my normal electric kettle - it was a quarter of the price and has lasted several years (and counting).

As the insanely great Steve Jobs once said, "design isn't just what it looks like and feels like; design is how it works". Nothing better sums up my feelings about this product.
続きを読む
32人のお客様がこれが役に立ったと考えています
役に立った
フィードバックを送信中...
フィードバックをお寄せいただきありがとうございます。
申し訳ありませんが、お客様の投票の記録に失敗しました。もう一度試してください。
違反を報告
レビュー を日本語に翻訳する

Tony Li
5つ星のうち5.0 Beautiful kettle. But heard it’s fragile
2018年4月3日に英国でレビュー済み
Amazonで購入
Bought this on warehouse deals. A beautiful piece. But I collect a lot of Alessi stuff and not use it. I use a Tesco kettle to boil my tea. This to look at! Only paid £58 can’t complain (instead of £200)
続きを読む
役に立った
フィードバックを送信中...
フィードバックをお寄せいただきありがとうございます。
申し訳ありませんが、お客様の投票の記録に失敗しました。もう一度試してください。
違反を報告
レビュー を日本語に翻訳する

Marion de Maat-Lenos
5つ星のうち3.0 Wonderful design, mechanical weak points
2020年3月4日にドイツでレビュー済み
Amazonで購入
I love the design but it’s not the best build kettle. My previous one was broken after at least 10 year. The new one the rubber at the handle shifts and I expect it will be broken again after one year. You need to replace the whistles every year.
続きを読む
役に立った
フィードバックを送信中...
フィードバックをお寄せいただきありがとうございます。
申し訳ありませんが、お客様の投票の記録に失敗しました。もう一度試してください。
違反を報告
レビュー を日本語に翻訳する