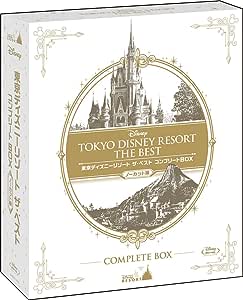 LA
5つ星のうち5.0 An Entertaining Look at the Tokyo Disney Resort
2015年5月29日にアメリカ合衆国でレビュー済み
Amazonで購入
I bought this Last year,watched it and made notes. First off let me say , if you plan to buy this product ,buy the Blu-Ray. Japanese Blu-rays play on American Blu-Ray players ,if you buy the dvds those will only play in Japan [or maybe on your computer] Do Double check this[ i looked at a chart that explained the different "Zones" for Dvds and Blurays [ if Amazon doesn't have this chart Google it ] There are 4 Discs and this is what's on them. Alll 4 Discs have a "Play all " button a Photo Gallery Button and a Tour of the new Tokyo Disneyland Hotel.

Disc 1. "Spring " Chapter 1. The 1993 10th Anniversary Show "It's Magical" 18 mins. English
Each of the Disney Characters have a different color , Minnie is "Pink" Donald is "Blue" Pluto "Yellow , Goofy "Orange " , Chip 'n' Dale "Green" Maleficent shows up and steals all the colors then turns herself into a giant Dragon. Mickey has to fight the Dragon [ ala "Fantasmic" ] and brings back color to the Magic Kingdom. this is quite a Fantastic show ,there are many Dancers on the Castle stage and they transform from a silvery Grey into a Fantastic array of colors. The show ends with a Giant Blow- up Balloon of "Sorcerer Mickey Mouse"

Chapter 3. "Tokyo DisneySea Spring Carnival" Year 2009 Music in English/Japanese Characters speak Japanese 20 mins ?
Tinkerbell and her Fairy Friends welcome Spring as they speak Japanese and float on a "Floral" Barge around Tokyo DisneySea Bay
as this is happening a "Parade" of Festival Dancers led by Mickey and the Gang perform on land and around the bay in Beautiful "Floral " costumes. This is the kinda of show that could maybe play in "Epcot" in their "World Showcase" Beautiful!

Chapter 1. "Magic Kingdom Parade Mickey Mania" Year 1995 English approx. 20 mins
[ What can i say , a Parade for the World's most famous Mouse ]

Chapter 3. 25th Anniversary Summer Show "Cool The Heat!" English [ Though Goofy Speaks Japanese] approx. 45 mins
This is a Bit Strange , These are 4 "Short" Shows basically all the same except "Featuring" a different Disney Character
These are Basically a Daytime Castle Themed Water Show ,instead of Fireworks they "Spray" the Audience with Water

2011 "Cool the Heat " with Donald Duck and Pirates English ?

As i said before each disc has a Photo Gallery [ with a Gazillion Photos ] i believe they are grouped by year [ it's very hard to tell because all chapter commands are in Japanese ,you'll have to play with it ] And Lastly each Disc has a Chapter Devoted to the New Tokyo Disneyland Hotel . Again everything is in Japanese ,but here is the rundown..................................

Outside the Hotel at Night [ Just Beautiful ]

The Suite[s] The Decor seems to be very "Turn of the Century" American with Disney Touches . The Rooms seem to fit a Family of 4. There was 2 Beds + an Alcove Bed ,there also was an "Inflatable " Bed next to the Beds. And the Last stop on our Tour is......

Whew! To all those who have wanted to purchase this Box Set ,i hope this helps . It would be better to buy this Box set than to purchase the individual Blu-Rays . I think Pretty much everything on those Single Discs is in this Box Set, but it's hard to tell since i don't read Japanese . If By any chance i have made any mistakes [approx. Times ,Languages etx.] I hope you will forgive me
Good Luck LA