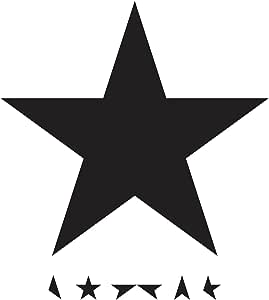 The Punk Panther
5つ星のうち5.0 I can't give everything away...
2018年8月31日に英国でレビュー済み
Amazonで購入
This, then, is David Bowie's deathbed valedictory release. For that reason, it is an extremely difficult album to review. It is just seven tracks of avant-garde jazz-influenced material. Bowie had, no doubt, wanted to do an album like this anyway, impending demise or not.

The title track is a wonderfully bleak and very atmospheric track, all full of portentous gravitas, strong drum beats, deep, sonorous saxophone parts and a typically haughty vocal from Bowie. There are also monk-like chanted backing vocals. The whole thing takes on a holy ambience. The bit where the pace suddenly changes half way through and he sings "something happened on the day he died" and the melody suddenly takes on a seventies feel is just so poignant. "'Tis A Pity She Was A Whore" (taking its title, almost verbatim, from a seventeenth century John Ford drama "Tis A Pity She's A Whore"). Bowie's song bears no relation to the play and is a frantic piece of avant-garde jazz rock, with high-pitched saxophones swirling around all over the place and perplexing lyrics. It is highly enjoyable though, as too is the soulful, saxophone and guitar-driven "Lazarus" with its death-knell solemn drumbeat and its "look up here - I'm in Heaven.." now iconic opening line. "Everybody knows me now..." sings Bowie, plaintively, as the drums continue and the saxophone floats all around. It really is a heartbreaking listen. However, taking it out of context, and viewed objectively it is a damn good track. The end has a rubbery, intoxicating bass line and some cutting guitar breaks that enhance it even more.

"Sue (Or In A Season Of Crime)" is another lyrically mystifying one. It was released considerably earlier than the rest of the album, in October 2014, and had many scratching their heads over the seven minutes of jazz meets dance rhythm meets haunting lyrics. Not expecting Bowie's demise at that point, reaction to it was definitely mixed. They should have known Bowie better than that, by then.

"Girl Loves Me" is a slow-paced, mournful lament sung over a huge, powerful slow drum beat with some echoey vocals. "Where the f*** did Monday go?" questions Bowie, several times, in oddly vulgar fashion. None of the material on this album has anything like the instant appeal of the previous album, it has to be said, but that has always been the case with Bowie albums. Rarely is one just like the previous one. "Dollar Days" is an endearing song, with a lovely saxophone solo and, despite its lightness of touch (compared to the other material) still carries a considerable poignancy. "I'm dying to...." sings Bowie, continually, with a profound double meaning. It segues, via some shuffling drums, into "I Can't Give Everything Away", a fetching, typically Bowie song with clear echoes, I feel, of the track "Never Let Me Down", particularly in its harmonica part. Some jazzy saxophone adds to the experience too. This was the final track on the final album from David Bowie. Goodbye, then, you strange, ethereal, distant man who has been part of my life from that same distance since 1972, when I bought "Ziggy Stardust" as a fourteen year-old. I quite like the fact that David Bowie leaves us with some adventurous jazz sounds flying around over his repeated "I can't give everything away" line. He ended on a song that pushed the boundaries. As indeed he should.

This is a bold, experimental album that would have been given critical kudos anyway, despite its sad derivation. Many, at the time, despite the situation, found it dull or needlessly experimentational. If they thought that, then they didn't understand David Bowie. It was always that way. The same people threw up their hands and shook their heads upon the release of "Low". Three years on, it can be listened to with fresh ears and it has a real appeal that begs more listens.
続きを読む
52人のお客様がこれが役に立ったと考えています
違反を報告
レビュー を日本語に翻訳する

Bluebottlethethird
5つ星のうち5.0 Not the best introduction to his work
2016年3月2日に英国でレビュー済み
Amazonで購入
A sad day and a sad listen. It's hard to think how I would have reacted to this album had Bowie not died on its release. This is a dark album which has only a couple of 'lighter' moments and the fact that he knows the end is approaching is evident in the song lyrics. This is an album I had to buy having all his other albums and would have bought even if he was still with us. However, it won't be one of his albums I'll choose to play regularly as The Next Day will be played more than Blackstar. I've bumped into people who are exploring Bowie for the first time just because of the occasion and were going to purchase this as their introduction to his music. I fear that they might have been put off buying any more of his albums on the strength of this instead of most of his other works. But as a fitting epitaph to a great artist during his last months, this album is excellent in achieving that.
続きを読む
22人のお客様がこれが役に立ったと考えています
違反を報告
レビュー を日本語に翻訳する

Quiet man
5つ星のうち5.0 A hero for more than one day.
2016年2月12日に英国でレビュー済み
Amazonで購入
Hunky Dory was the first album I ever bought as a nervous but very excited 14 year old going into a record shop for the very first time. I have followed David Bowie's career ever since and still rate that album as my favourite. Now, over forty years later I find that Blackstar has made just as big an impression on me. Every listen brings something new, challenging and thought provoking. All the more special when realising that it was written and created in his last year of life. A fantastic album by a truly amazing talent.
続きを読む
18人のお客様がこれが役に立ったと考えています
違反を報告
レビュー を日本語に翻訳する

IAIN
5つ星のうち1.0 It’s like marmite, you either love it or hate it.
2019年4月3日に英国でレビュー済み
Amazonで購入
I’ve been buying Bowie’s music since the 70’s and I think this only got rave reviews because it was his final farewell. Personally I hate it, Bowie’s voice is superb, but the tuneless saxophone player in the background on several tracks, just doing his own thing, utterly spoils it. Such a shame, and I so wanted to like it, that’s why I bought it on vinyl, it’s boring self indulgence, I’m just so disappointed in it.
続きを読む
3人のお客様がこれが役に立ったと考えています
違反を報告
レビュー を日本語に翻訳する
すべてのレビューを参照します
Amazonプライム会員ならお急ぎ便、日時指定便が使い放題
さらに、映画もTV番組も見放題。200万曲が聴き放題 。クラウドに好きなだけ写真も保存可能。
> プライムを無料で試す